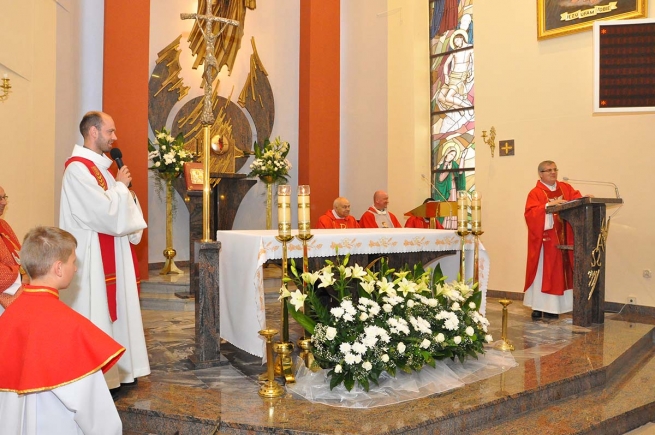 (ANS - Siedliska) - On Sunday 2 July in Siedliska, Poland, the native country of Blessed Józef Kowalski, SDB, celebrated the 75th anniversary of his martyrdom which took place in the concentration camp of Auschwitz on July 4, 1942. It has been over ten years since commemorating Blessed Józef Kowalski on the first Sunday of July in his parish of origin has become a tradition.

The solemn celebration, which saw the participation of several other area's priests and a large representation of the Salesian Family, was presided over by Fr. Adam Parszywka, Provincial of Cracow, while the homily was made by Fr. Pier Luigi Cameroni, Postulator General, who emphasized some of the characteristics of Blessed Kowalski's testimony: a journey of Christian life and religious perfection marked by familiarity with Jesus, contemplated and lived in its mysteries; a martyrdom prepared in fidelity to commitments undertaken, and to humble self-reflection, supported by a determined will and a readiness to face all its consequences: "I embrace the sweet cross of the call of Christ and I want to carry it to the end, to death." The memory of Fr Kowalski's martyrdom recall the Passions of the Church's early martyrs, where a supernatural environment defeats a world of cruelty and inhumane ugliness through forgiveness of the persecutors and the generous gift of life in union with the redeeming sacrifice of Jesus.

It has been observed that in the light of the diaries of Blessed Kowalski one can see the great influence of the motives of St. Dominic Savio and the oblational spirituality of the venerable Fr Andrea Beltrami had on his spiritual formation.

In the afternoon of that same day, Fr. Cameroni met with members of the Salesian Family, including numerous Salesian Cooperators and members of the Association of Mary Help of Christians (ADMA), to whom he presented the holiness of the Salesian Family, calling for knowledge of the martyrdom of Fr Kowlaski and his Marian devotion to be known and promoting the holiness of the family as a place where vocations of marriage, or of consecrated life and priesthood are born and grow.