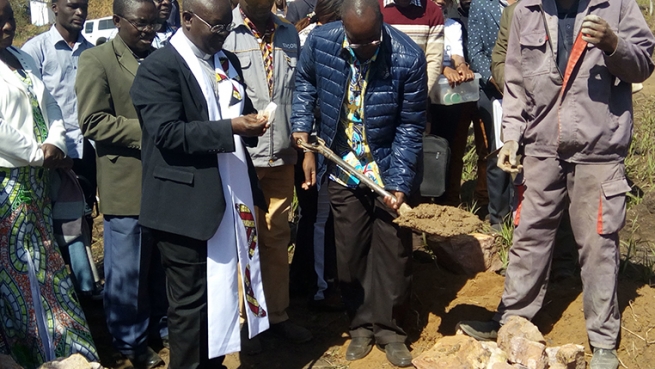 (ANS - Lubumbashi) – The Salesians of Don Bosco in the Central Africa Province (AFC) are heading towards the future. The project of building a Salesian University was officially launched in Lubumbashi, Democratic Republic of Congo, on June 27 with the laying down of the first stone of the Higher School of Economic and Political Administration's (EcoPo) new structure.

Approximately 3 years are expected to complete this project's first phase at the end of which, in 2020, EcoPo - which has already been active and operational since 2010, but at other facilities - will be able to use its own buildings.

The first stone was set by Fr Jean-Claude Ngoy - who had just concluded his term as Inspector a few days before - along with the new Provincial, Fr Albert Kabuge, and the EcoPo Management Committee. According to EcoPo's CEO, Prof. Emmanuel Banywesize, it will be possible to accommodate "at least 2,500 students" with these new buildings.

The Salesian University project shall gather several institutions of higher education in one location: the EcoPo, the Salama School of Information Technology (ESIS, in French), the Theological Institute of St. Francis of Sales, and the St John Bosco Higher Institute of Philosophy.