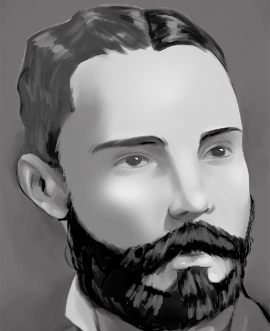 (ANS - Granada) - Narciso Sequeira Arellano (1851-1923), originally from Granada, Nicaragua, was the first Salesian in Central America. He decided to enter the Salesian Congregation in 1895. He was 44, single and ridding himself of his wealth.

Until then, Narciso had lived a worldly, bold, libertine existence; devoting himself to gallant conquests in Paris, he was only interested in sensual love. Then suddenly he became silent, meditative. Hearing an inner voice, he began to worry about his soul's salvation. He seemed enlightened, as if he had received the light of conversion.

He made his profession as Salesian at Sant Vicenç dels Horts, near Barcelona, Spain, on 22 October 1896, but preferred not to opt for the priesthood, a privilege he considered too great for himself; aspiring to serve only, he chose to be a Salesian Coadjutor, instead. Fr Michele Rua, Don Bosco's first Successor, told him in Turin, on the third day of the Novena they were reciting, to be enlightened in choosing his new state of life: "Mary Help of Christians wants you to be Salesian Coadjutor."

From that moment on, Mr Sequeira Arellano remained the same as ever: calm, charitable, jealous of his conscience and his uncommon enlightened piety.

At the beginning of his consecration to God, his Superior appointed him as librarian, but Narciso soon asked to be assigned a more humble role. They gave him the job of proofreader in the typography and he worked at it intensely. Transferred to the house in Seville, he decided to be its concierge and was, for a long time, the ideal receptionist, working according to regulations.

Mr. Sequeira Arellano spent thirty years of holy life serving all those who knew him. Cheerful and courteous, always humbly dressed, he treated everyone as his superior. "It was uplifting to see him do any assignment without ever flaunting his vast culture and his noble birth," said Fr Gioacchino Bressan on 28 September 1923, the date of the Nicaraguan Salesian's death.

“In his last and brief infirmity,” continues the commemoration written by Fr Bressan, “he showed himself kind and grateful for everything and his lips often pronounced brief words of joy. Finally exhausted and deprived of speech, he made a supreme effort to bring the crucifix to his mouth and kiss it. His life was a constant prayer, a tribute to his fellow countrymen in Nicaragua.”