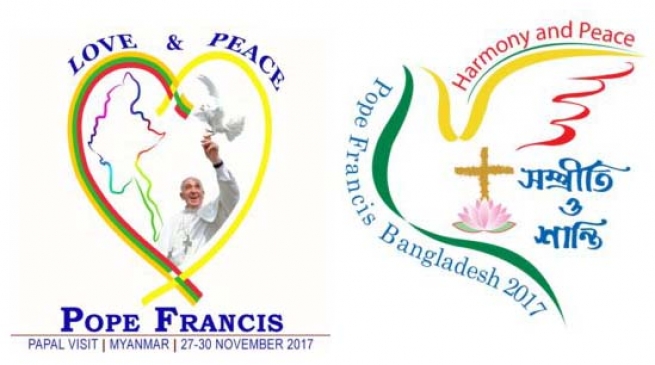 (ANS - Vatican City) - On 28 August, the Holy See Press Office announced that Pope Francis will visit Myanmar and Bangladesh from November 27 to December 2. Press Room Director Greg Burke reported the Pope has welcomed the invitation of the respective heads of state and bishops.

The pontiff will travel to Myanmar from 27 to 30 November, where he will visit the former capital Yangon followed by a visit to Naypyidaw, the new capital since 2005. It is the first ever voyage of a Roman Pontiff to the Southeast Asian country.

According to Vatican Radio data, Myanmar now has more than 51 million inhabitants, of which almost 90% are Buddhist. Christians represent 4%, of which about 700,000 are Catholics. Muslims are also circa 4% of the population.

The Catholic Church of the country is divided into three archdiocese - Mandalay, Taunggyi and Yangon - and 13 dioceses. The prominent figure of the Burmese Church is Cardinal Charles Maung Bo, born 1948, archbishop of Yangon. The Salesian received the purple from the hands of Pope Francis in the Consistory of February 14, 2015, becoming the country's first cardinal.

The Catholic Church of Bangladesh has two archdiocese - Dhaka and Chittagong - and six suffraged dioceses. In the Consistory of November 19, 2016, the Pope elevated the archbishop of Dhaka, Msgr. Patrick D'Rozario, born 1943, to cardinalate. The religious of the Congregation of the Holy Cross is the first cardinal of the country's history.

Bangladesh is one of the world's most densely populated countries: today almost 170 million inhabitants live in an area of 147,570 km².

A Salesian Congregation is present in both countries. The Myanmar Vice Province has 11 aggregate houses where 74 Salesian people are engaged in various pastoral activities, vocational training, assistance to the sick, aspirantate, novitiate, post-novitiate and formation of theologians. In Bangladesh, there are two Salesian houses dependent on the Province of Calcutta: at Lokhikul, a parish with two Salesians in youth ministry and development work; at Utrail, four Salesians in development work, primary school, youth center, college and pre-novitiate.