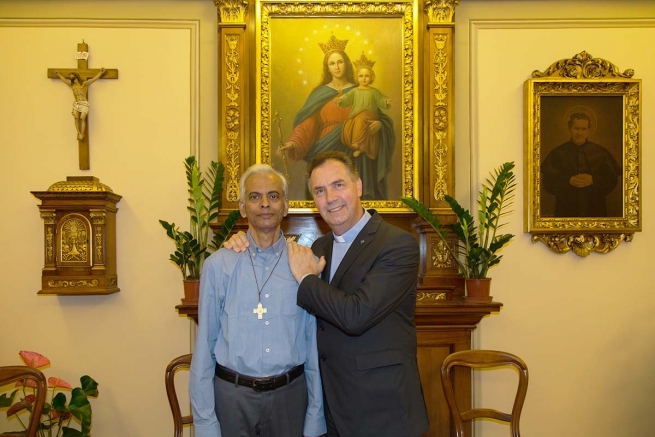 (ANS - Rome) – The Indian Salesian Missionary Fr Tom Uzhunnalil, seized in Yemen in March 2016, was released on 12 September. Liberation and consignment took place through a humanitarian operator, who worked closely with the Sultanate of Oman, and thanks also to Pope Francis's personal commitment and influence.

Initially welcomed in Muscat, Oman, on the same day, the Salesian flew to Italy and landed at Ciampino Airport in Rome; from there, he was brought to the Salesian community in the Vatican, where he is currently housed and waiting to return to India.

Fr Tom was kidnapped by a commando of armed men on 4 March 2016 during an attack on the House of Missionaries of Charity in Aden, Yemen, where 16 people were killed, including 4 religious.

Originally from the Indian state of Kerala, Fr Tom, now 59, was working in the Salesian mission initiated by his uncle, Father Matthew Uzhunnalil, and had been in Yemen for 4 years when he was kidnapped.

Immediately following his capture - never openly declared or claimed by any terrorist or military group – many mobilized for Fr Tom's release: throughout his imprisonment, there were innumerable appeals, vigils and prayer initiatives, pledges of proximity and solidarity by ordinary Christians, as well as more prominent figures, including Pope Francis, first of all, who on April 10, 2016, after the recitation of Regina Coeli, or Queen of Heaven, appealed for his release.

Prominent roles throughout the affair were played by the Indian Foreign Minister, Hon. Sushma Swaraj; the Apostolic Vicar of South Arabia, Mgr. Paul Hinder; the Bishops' Conference of India, led by the President of the Episcopal Conference, Cardinal Baselios Cleemis Thottunkal, and the bishops of the state of Kerala, who repeatedly appealed to the Indian government; and the Salesians of the Bangalore Province, who are responsible for the mission in Yemen.

On the Indian missionary's fate, however, there had been no reliable news for quite some time. Near Easter 2016, there were uncontrollable rumors spreading about the will of his kidnappers to kill Fr Tom by crucifying the Salesian on Good Friday, rumors that resounded on social networks.

Later, in July 2016, images began to appear on Fr Tom's Facebook page where he seemed to be in a bad state, bandaged and beaten. The authenticity of those images was immediately questioned by his confreres in the Bangalore Province, and the Facebook page in question closed.

During the time of his captivity, the kidnappers released two videos in December 2016 and in May 2017, wherein Fr Tom said he had been "forgotten" by all and he called for the Pope and the world's Catholics to act soon for his release.

A few months ago, the Salesian Congregation was informed of the contacts being established with the kidnappers, and remained in constant contact with the authorities involved in his release, but with no further information forthcoming.

Father Tom's name was never forgotten in prayer by his Salesian confreres from around the world, nor by the Salesian Family, and even the Missionary Sisters of Charity who had put his picture on the tomb of Mother Teresa of Calcutta, as if asking the saint to intervene.

After more than 18 months, the news that made the rounds across the globe: Father Tom has been released! Certainly, one notices that the Salesian missionary's face is now emaciated, that his body has been tried, but he is at peace and in peace with God. Fr Ángel Fernández Artime, Rector Major of the Salesians, declared after a fraternal meeting with him: "Father Tom is a testimony of faith for the world, for the Church and for the young."