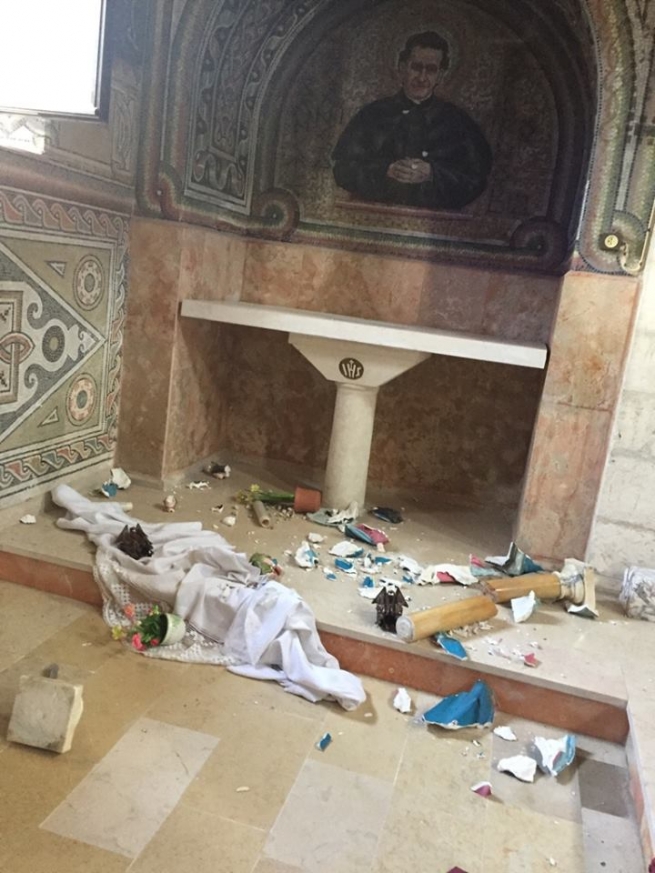 "On Wednesday, September 20, between three and four in the afternoon, the church was open. I was in service inside the religious items shop near the church, but I went away to accompany some pilgrims. It was probably then that the delinquents came in," said one of the Salesians of the Beit Jemal community, contacted by Salesian iNfo Agency.

The damage is enormous: "The statue of Our Lady has been reduced to rubble, the Cross knocked down, and even a confessional overturned, along with the sacred vestments, candlesticks, the lecterns ... The worst damage is to the windows, which represent the life of Jesus, against which the assailants were especially rabid in striking the faces of the represented figures," said the Salesian.

For this reason, Msgr. Giacinto-Boulos Marcuzzo, patriarchal vicar for Jerusalem and Palestine, was deeply saddened not only for the economic damage, but above all for the "fanatical message that this attack embodies." Today, Friday, September 22, the condemnation of the Assembly of Catholic Ordinaries of the Holy Land, has reiterated and remarked that "similar criminal acts have been repeated many times in recent years, while at the same time we do not see any response security-wise or educational from state authorities against this dangerous phenomenon."

While the Israeli police announce starting an investigation into the incident, encouraging signs for the local Christian community come from people living near the complex. "Since yesterday we have been receiving visits from our Jewish neighbors," said the Salesian we spoke to. "They come to bring solidarity, to support us, and some have already expressed their willingness to contribute economically to reconstruction."

The Beit Jemal complex includes a monastery and a cemetery, which had already been defiled in January 2016; the entire complex is located circa 27 km west of Jerusalem and near the town of Bet Shemesh. Not far from the complex, there is also the site where the first Christian martyr is believed buried.