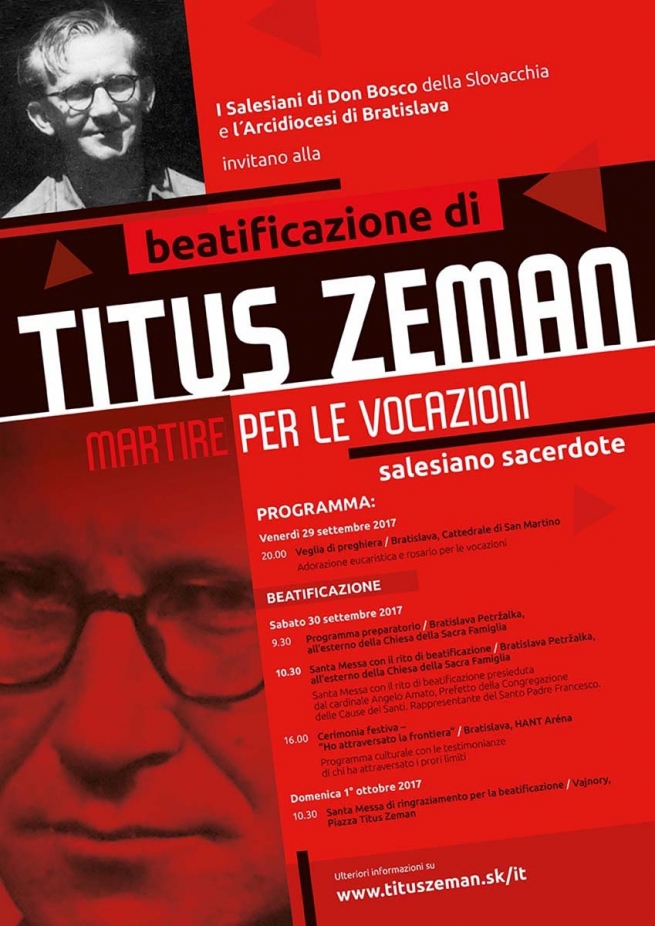 (ANS - Rome) - On the occasion of the imminent beatification of Venerable Fr Titus Zeman, SDB, taking place on September 30 in Bratislava (Slovakia), the Rector Major, Fr Ángel Fernández Artime, has sent a letter to Salesians across the globe and to members of the Salesian Family.

In it, Fr Á.F. Artime emphasizes that it is significant that the martyrdom of Fr Zeman is acknowledged as fruit of the sanctity of the Salesian family, in the light of the Bicentenary of Don Bosco's birth, 2015, and following the beatification of the Blessed Stephen Sandor, the Hungarian Salesian Coadjutor, in 2013.

After tracing the life of Fr Zeman, the missive describes this life as being focused on encouraging others towards that "fidelity in the vocation" which his was so decisively characterized by. His was, indeed, a total love for the Church and for his own religious vocation and apostolic mission. His bold actions sprung from this love that unified and was unifying. The heroic testimony of Blessed Titus Zeman is one of the most beautiful pages of faith that Christian communities in Eastern Europe and the Congregation have written during the years of persecution by Communist regimes in the last century. In Fr Zeman, the commitment to the young consecrated and priestly vocations shines and illuminates.

The Rector Major also highlights the ecclesial relevancy of Fr Zeman's beatification in relation to the preparation and celebration of the forthcoming bishops' synod on the subject: "Young people, faith and vocational discernment". Through clandestine passages, Fr Zeman embodied in a way those fundamental steps in the discernment process, the main tools offered to young people towards the possibility of their discovering and realizing their own vocations in the light of faith.

In conclusion, the Rector Major invites all Salesian communities and groups of the Salesian Family to celebrate the memory of the new Blessed, to learn of his martyrdom, and to invoke intercession for the perseverance and the abundance of vocations.

The Rector Major's letter is available in its entirety on the sdb.org website.

Further information on Fr Zeman and his beatification are available on: www.tituszeman.sk/en