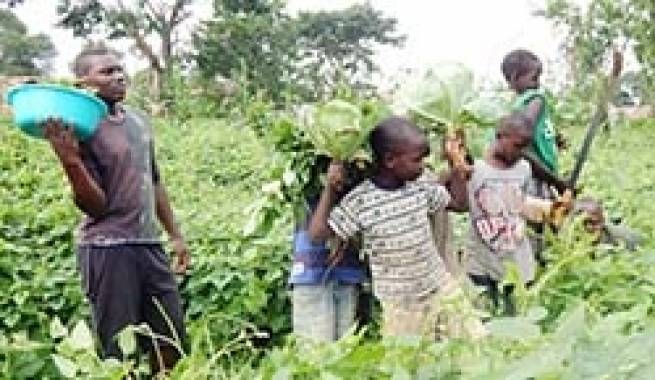 (ANS - Namugongo) - Uganda is a predominantly agricultural country, with 80% of its area devoted to agriculture. However, young people seeking jobs in urban areas often leave small agricultural plots of land in rural areas uncultivated. The soil is fertile and there are two rainy seasons per year, resulting in two harvests a year.  The Salesians have begun to take advantage of this situation to offer additional educational opportunities.

The property of Don Bosco Kampala in Namugongo covers an area of ​​almost six hectares. The Salesians took charge of the farm in 2005 and the beginnings were difficult. The work caters for more than 140 children and teenagers but the main problem is that of economic resources.

In 2013 the first attempt was made to cultivate the vast wilderness and to involve young people in an agricultural project. The start of a farm project with geese and ducks, pigs, goats and cows was a success, but the agricultural project in the first two years did not produce a good yield.

Last year, however, brought joy and happiness to the entire Salesian community in Namugongo, for the results obtained were excellent: cabbage, carrots, onions, beans, corn, manioc, eggplant, peppers and sweet potatoes in abundance.

Thanks to this agricultural project, many children and young people have learned a trade that guarantees them a future, in addition to receiving a quality education at Don Bosco Kampala.

The factors that led to the growth of the agricultural sector in the centre are the interest of the Salesians in agriculture to provide food for young people and collaboration with an adequate number of good teachers.

The Salesians continue to look to agriculture as the main source of food supply in the community and also hope that the farm will benefit from the agricultural project, since the farm animals are fed with crops produced. However, the Salesians also face some challenges, such as pests and animal diseases, lack of funds and poor quality seed on the market; but they trust in Providence and intercession of Don Bosco, and continue to provide education for the future of young people.