France – An exciting programme at the end of the Provincial Chapter 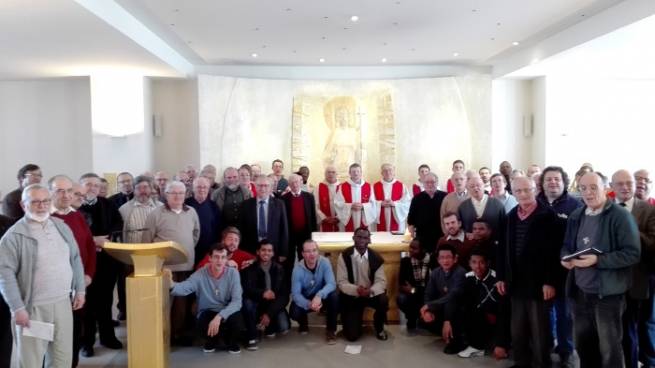 (ANS - Lyon) - A Provincial Chapter is a fixed event that is repeated every three years; but this year’s Chapter of the Province of France and Southern Belgium, produced not only an exciting presentation of the work of the coming years, but also and especially a programme of  commitment for young people. During the Provincial Chapter 40 guidelines were approved that will direct the pastoral work of the Salesians for the coming years.

In February 50 Salesians and some special guests came together for the Chapter. The Provincial, Fr Daniel Federspiel, invited a group of young people, the retired bishop of Bayeux, the Provincial of the Daughters of Mary Help of Christians, the national coordinator of the Salesian Cooperators, the President of the Past Pupils of Don Bosco and the President of the Past Pupils of the FMA, for a total of 68 participants.

The Vice-Provincial, Fr Vincent Grodzinski, acted as Moderator. After several days of intense work, the Provincial Chapter of France and Southern Belgium ended with the approval of 40 guidelines for pastoral work. These guidelines focused on four areas. The first is intended to direct the religious life and the Salesian mission; the second invites the Salesians to be present in the new areas where the young people are to be found; the third calls for a rethinking of the communities, making them quantitatively and qualitatively consistent; and the last is an educational proposal that will help the Salesians to achieve openness - inter-generational, inter-cultural and inter-congregational.