Italy - Little Girl or Bride? Race of Saints 2017 and its solidarity project
Featured 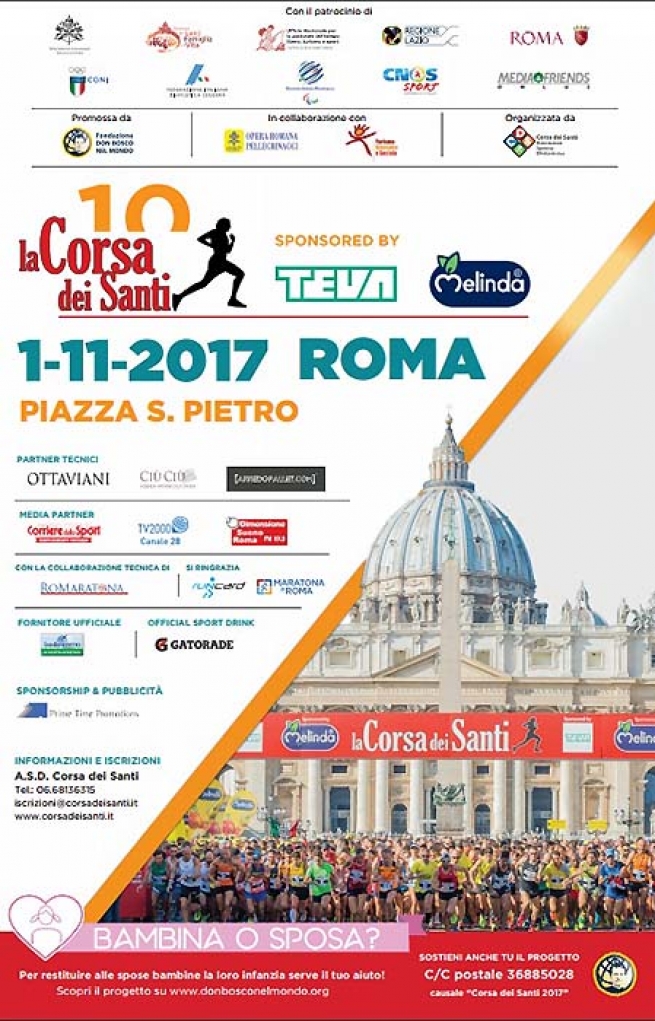 (ANS - Rome) - The Race of Saints is now 10 years old and runners and fans will be celebrating the race in the streets of Rome again this year with an event that combines solidarity with sport: thanks to the commitment of the DON BOSCO IN THE WORLD Foundation, the sporting event, scheduled as usual in Rome on 1 November, All Saints' Day, will go to benefit the "little women" of India, child brides forced to marry adult men, with serious health and psycho-physical consequences.

The race course, as per tradition, starts and finishes at Piazza Pio XII after the Eucharist in the Basilica of St Peter, which is open to all participants. New to this year's edition will be the opportunity for amateurs to run the 10 km competition; thus, there will be 3 races: 10 km for professional athletes, 10 and 3 km for amateurs.

Among the thousands of participants, there will also be 50 marathon runners from "Vatican Athletics" as "solidarity is the very reason for the existence of Vatican Athletics," said Msgr Melchor Sánchez de Toca, Secretary of the Pontifical Council for Culture, himself a dedicated jogger.

The event aims to spotlight the plague of early marriages, child brides, in India and raise funds to counteract the phenomena. More specifically, the project promoted by the DON BOSCO NEL MONDO Foundation focuses on the State of Karnataka where, as reported by the Commission for the Protection of Children's Rights of the same State, 23% of the entire country's early marriages involving child brides take place.

For years, the Salesians of the India-Bangalore Province - which includes the State of Karnataka - have been working to help girls being denied their childhood due to ancient social conventions and myopic economic advantages. To do so, the Salesians have established a program called “CREAM”, the Child Rights Education and Action Movement, and is being brought forward by “BREADS”, the Bangalore Rural Education And Development Society.

The DON BOSCO IN THE WORLD Foundation has worked on the issue alongside the Salesians in Bangalore and ONG BREADS to ensure that girls are guaranteed their rights, and through the development of programs for formation and education of those same fundamental rights, to make both the girls - and the communities they live in - aware of their rights and free.

More information is available on DON BOSCO IN THE WORLD Foundation website.