THE DARK FACE OF INTERNET
Featured 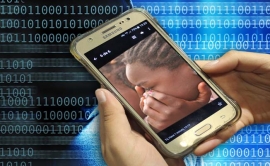 If we wanted to find a metaphor to fully describe the revolution caused to society since the introduction and use of the Internet, we could certainly compare this phenomenon to the discovery of a new planet, a new continent, a territory continuously being explored that we cannot manage to fully fathom, one we  repeatedly marvel at, that surprises us with ever-new aspects and unexpressed potential.

By its nature, the Network is a dynamic space, constantly moving and transforming itself, consisting of networks and sub-networks; of different types and shapes that, in essence, aim to facilitated encounters between people or groups with similar interests, or the exchange of every type of content, to create spaces for play, or for any variety of various and infinite needs.

The digital world is the result of an extraordinary convergence between technology and science that has radically transformed our lives and our way of communicating and relating to each other.

New residents register on this planet every second, with new content and new forms of association and interconnections at a number of levels.

This territory has quickly been invaded by teenagers and young people who enter without fear or prejudice, trying to satisfy their need for company, affection, communication, meeting. Today, the network is used worldwide by over 800 million minors.

It is in relation to minors that the Internet presents its darkest side, the cause of new and serious worldwide issues: child pornography, or trolling, cyberbullying, sexual blackmail, or sextortion, sexual seduction of minors, grooming, or the sending of messages, texts and sexually explicit images via mobile phones or like means -  sexting in technical term - not to mention the traffic of children, especially young girls.

All these situations have spread exponentially, overcoming and going beyond the control of social institutions to cause profound damage to the social, moral, and ethical fabric. A study by the European Union states that on the Net, 20% of children under the age of 18 have already been victims of some form of sexual violence.

For the Church, this is a difficult topic to deal with for historical reasons; however, the Pope invites us to begin from our own communities, demanding zero tolerance, facing without fear and with decision any and all kinds of abuse against the dignity of minors; also, one must begin to talk about the problem without qualms, starting from concrete data, seek concrete and effective forms of prevention; above all, forming educators and parents in the primordial nucleus of the family who know how to accompany children in the "digital courtyards."

One must abandon a partial or one-sided view, stop thinking it is a problem meant to be dealt with solely by specialized institutions, or be all-too-naive in relying blindly on computer algorithms or filters that can keep children away from these dangers. Protecting the physical and psychological integrity of minors is a task that implies cooperation of all institutions, starting with the family and parents. The latter are increasingly seeking to open spaces for dialogue with their children to talk and discuss these issues.(1)

When we think of Don Bosco walking through the streets of Turin trying to save young people from moral dangers, creating schools, engaging employers and writing to authorities, it comes natural for us to ask what he would do today in this new scenario; what initiatives would arise in his heart as Father and Pastor of souls after reading news of violence to minors on the Net, or the trafficking of minors as goods reduced to simple objects for use and for sale.

1. (The speech of the Holy Father to the members of the Congress on the Dignity of Children)