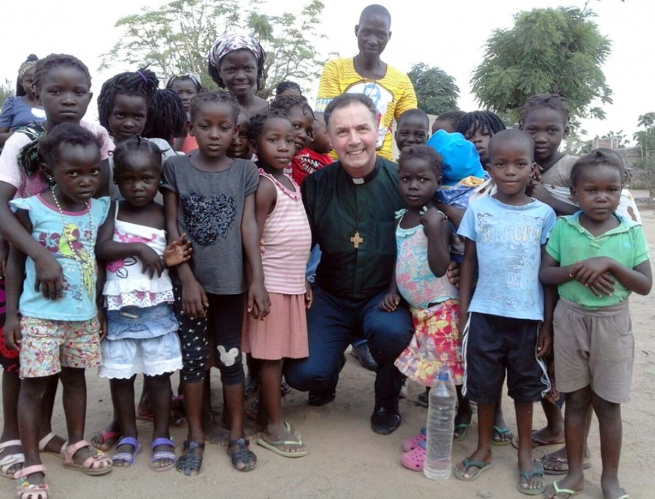 (ANS - Moatize) – Late yesterday morning, November 22, Rector Major Fr Ángel Fernández Artime flew to Tete on what was the second day of his visit to the country. The X Successor of Don Bosco came, thus, to see the invaluable missionary work and social promotion the Salesians of Mozambique are involved in – with a prominent role played by numerous lay collaborators.

The Rector Major was accompanied by his secretary, Fr Horacio López, Councilor for the Africa-Madagascar Region, Fr Américo Chaquisse – orginally from Mozambique - and Fr Marco Biaggi, the region's Provincial.

The delegation moved to the District and Parish-Mission of Moatize, but stopped along the way to visit the São Paulo community of Chithatha. Fr Francisco Gonçalves Lourenço, SDB, parish priest, described the situation of the missions of the rural communities being served by the Salesians at Moatize: 30 communities, scattered along the great Zambesi river or in the mountains, some visited once or twice a year, others every three months, each animated by a layman accompanied by a small group of collaborators.

Within this missionary work, the Salesians have begun a project of agricultural and zootechnical development that has been going on for 11 years; this year, it involves 2,000 families, divided into over 60 groups of farmers. This project consists of professional guidance and accompaniment and a number of training courses, including a literacy school for women and groups of young farmers.

Early in the afternoon, the X Successor of Don Bosco reached the parish-mission dedicated to St John the Baptist at Moatize where the Rector Major was welcomed by a delegation of about 3,000 students, who attend the three Salesian schools. In the afternoon, the Rector Major visited the broadcasting studios of Don Bosco Community Radio, where he was able to interact with the young volunteers animating the radio station.

He then met with the Parish Council and, later, presided at the Eucharist, also concelebrated by Tete's apostolic administrator, Fr Sandro Faedi, and numerous priests.

After a festive celebration with the local communities of the Salesians and Daughters of Mary Help of Christians, the Rector Major greeted Moatize.

Available on ANSFlickr, photo and video of the Animation Visit.