Spain – "Prayers for Peace": youth of Spain and Syria united in prayer vigil 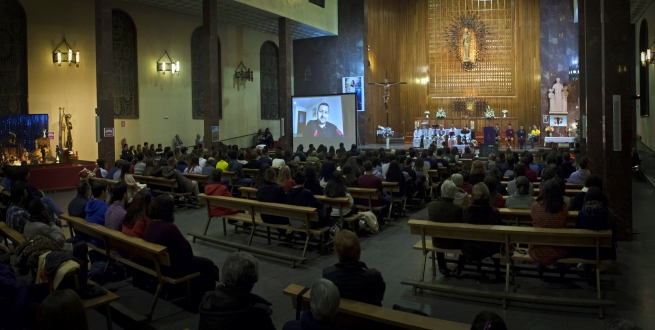 (ANS - Madrid) - "Israel and Syria have been officially in a state of war for decades," said a report published in the Spanish daily "El País" a few days ago. Peace, long-awaited, has still not been achieved in Syria: death is everywhere, the death of so many children, sick and elderly is harrowing and inhuman, as is the destruction and bombing of hospitals... The voice of Pope Francis on this reality has been constant: "No to destruction, Yes to peace!" and " Today we feel close, especially in prayer, to the people of Aleppo."

A young Syrian adds, "Syria was once a very beautiful country... Since the war started, everything has changed... God gives us a hand, full of faith and joy, through the Salesians who try to offer hope, peace and joy to the young."

Saturday, December 2, the young people attending the Salesian youth centers of Spain joined spiritually and in prayer the young of the Salesian oratories of Syria in a celebration organized between the sister institutes of the two countries via the "SURIYA" Solidarity Project - phonetic transcription of "Syria" in Arabic.

The prayer vigil took place in different forms throughout the country. In the "Mary Help of Christians" parish of the Atocha district of Madrid, Fr José Luis Villota, Delegate for Youth Ministry in the "Saint James, the Greater" Province recalled the words of Pope Francis on the love of Jesus: "Revealed on the cross, no one can hold back. It is like a spiritual GPS that leads us inexorably towards the intimate life of God and the heart of our neighbor." He invited everyone "to pray not only for young Syrians, but also for those who are part of the Salesian movement, thanks to the union that prayer offers."

The initiative is part of a larger project that includes awareness-raising activities in the 136 Salesian youth centers of Spain and includes exchanges of experiences between animators from the two countries, a special pro Syria fundraising campaign and intensification of prayer in Spanish centers to create spiritual solidarity and promote the calls for peace.