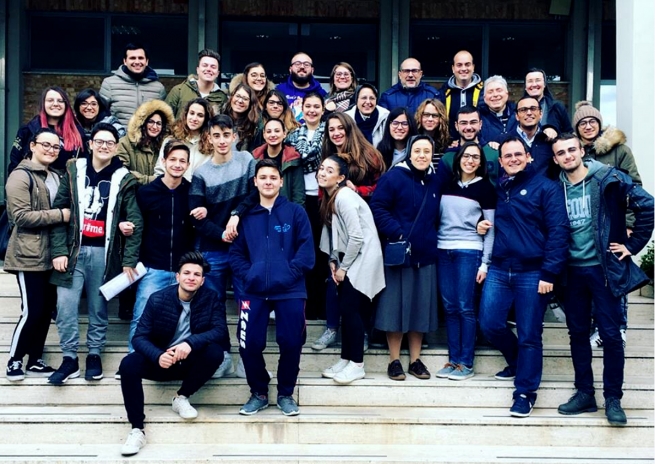 (ANS - Naples) – Formation for Provincial animators/pre-animators (FxA) is by-now a set appointment for those young people involved in the journey of animation who come from the oratories of the Salesians and the Daughters of Mary Help of Christians in Campania, Basilicata, Puglia and Calabria.

It is an opportunity to deepen their formation on a theoretical level, thanks to lessons on Salesian Youth Spirituality, Sacred Scriptures, the Magisterium of the Church, Psychology, Social Communication, etc .; but also on a practical level, expanding their knowledge of animation and liturgical techniques and tools. The FxA takes place twice a year: the Southern Province starts its course in winter; the course then merges into the Animators Camp that is held during the summer. The whole process completes the path of formation undertaken by the animators operating at the local level.

Though the young Calabrians postponed their workshop to February, this winter session for the Campani, Lucani and Pugliesi oratories was held from 28 to 30 December 2017. It focussed on the figure of Mary and the reality of the Church according to the theme characterizing the SYM year: "Home for many, Mother for all", that is: #nessunoescluso, or nobody excluded.

The Campani and Lucani participants gathered in Torre Annunziata; the Pugliesi in Santeramo in Colle. Both groups were immediately engaged in morning lessons. The day ended by a fun-filled and enjoyable evening. The morning of the 29th began, instead, with the Eucharistic celebration and was then entirely occupied by lessons. The topics covered during the course were: "Salesian Youth Spirituality and Mariology", "Sacred Scripture", and "Magisterium of the Church". Young sisters and confreres guided the various moments of study, prayer and conviviality. In the afternoon, participants experienced the pilgrimage to the cathedral of Salerno and in the Apulian sites of Father Tonino Bello. The evening ended for everyone with a prayer vigil.

On the last morning, all the participants had time for study – individually and in groups; their focus: topics covered on the previous days, topics they'd be tested on during their internship's final exam. The final Eucharistic celebration, presided over in Torre Annunziata by the Provincial Fr Angelo Santorsola, was a beautiful moment to thank the Lord for the enriching experience shared and lived together.

On looking on at how these young people took part in the workshop, sacrificing a part of their vacation in favor of Salesian formation, Don Bosco's words spontaneously arise from the heart: "Every moment of time is a treasure and every moment you engage well will be a treasure that you will earn!"