Haiti - Prayer and remembrance 8 years after the earthquake 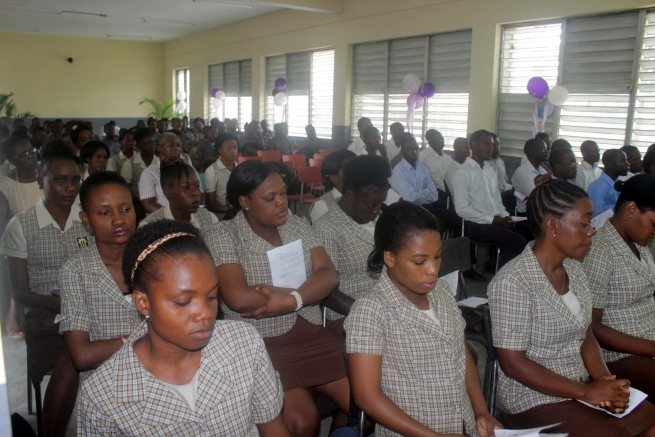 (ANS - Port-au-Prince) - Friday, January 12, 2018, exactly 8 years after the terrible earthquake that lacerated the country, a Eucharistic commemoration was held at the National School of Arts and Crafts (ENAM) in Port-au-Prince, the country's first Salesian center. The ceremony was presided by Fr Morachel Bonhomme, Vicar of the Vice Province of Haiti, and gathered a large number of Salesians, post-novices, aspirants, prenovices, staff and teachers from ENAM and the Little Schools of Father Bohnen (OPEPB).

In his homily, Fr Bonhomme began by reminding all the faithful of the importance of spiritual life for Christians. He insisted on making it clear that we were always to be ready to meet the Lord. Our whole existence belonged to God: "If we live, we live for the Lord, if we die, we die for the Lord."

The celebration recalled many episodes among the many people who still remember the painful events of 8 years ago. Many prayed for the over 200 Salesian students who perished that day, for the Salesian Coadjutor brother Hubert Sanon, the first Haitian Salesian, and for three other Salesian youngsters: Wilfrid Atismé, Valsaint Vilbrun and Pierre-Richard René.

In the afternoon, the Salesians headed to the University of Quisqueya where two of the young Salesians are buried, killed by the earthquake. In a room built for the occasion, the Salesians recited the Vespers, prayed for all the students who died at the site, beginning with the three Salesians in formation at the time. The whole day was spent in an atmosphere of profound meditation and reflection on the fragility of  human life.