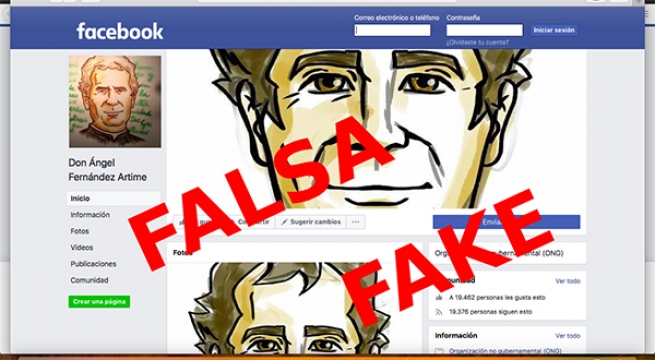 (ANS - Guadalajara) - A week since the Pope reminded Catholics of the importance of living according to the truth, including journalism and the use of social networks, and denouncing fake news, the bad news is that the 10th Successor of Don Bosco, Fr Ángel Fernández Artime, has not remained exempt from this phenomenon – as a victim.

There is, in fact, a Facebook user who for years has been using a false account similar to that of the Salesian Rector Major. The FALSE PROFILE is: "Don Ángel Fernández Artime" (www.facebook.com/Don-Ángel-Fernández-Artime-241088362745710). It is NOT managed by the Rector Major nor by any other of his collaborators.

The thinking and the practice of a believer in Jesus should not resort to lies, and even more so if they aim to undermine someone's credibility or even to capture the attention of a wider audience or distract it from what is useful and, especially: true. "The truth will make you free," said Pope Francis in quoting the Gospel of John.

The proliferation of false news and false websites, which mimic real, authentic and verified sites and accounts, has also required concrete answers from global service providers, such as Twitter and Facebook, where misleading news are often published. Alas, by the time someone is able to identify the falsehood, many have already fallen into the trap ... and others will never notice the deception right away, if ever.

Another phenomenon is the accounts of people who, in their desire to pay tribute or express their admiration for someone, create fake profiles and accounts of public figures. Artists, athletes, scientists and religious leaders have had to deny and even denounce those who pretended to be them, what is known as identity theft. That that person wanted at the beginning to flatter or pay tribute to the person one admires, or is a fan of, does NOT matter: it is a LIE.

Steps, of course, must be taken to prevent and avoid that someone is allowed to continue impersonating the Rector Major, for one, and the best way is to stop following false accounts and be aware and careful of any possible faked or offensive pages that might appear in his name. There is only one legitimate page.

If anyone really wants to be know more and read news and publications by and about the Rector Major, please visit or follow ANGEL Fernández-Rector MAYOR at: (https://www.facebook.com/ANGEL-Fern%C3%A1ndez-Rector-MAYOR-1475236676049017/)