East Timor - The Rector Major in a land steeped with Salesianity 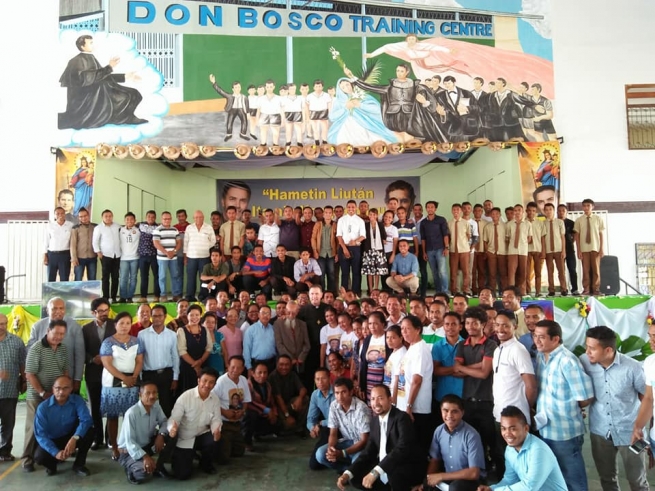 (ANS - Dili) - The Animation Visit of the Rector Major, Fr Ángel Fernández Artime, to the Vice Province of Indonesia-East Timor proceeds with widespread enthusiasm shared by all. The celebration of the feast of Don Bosco, on Wednesday, January 31, gathered thousands of people who were grateful and devoted to the Saint of the Young and to his Spiritual Sons. Meanwhile, the local media have also been giving ample space and coverage to the presence of the X Successor of Don Bosco to the country.

Yesterday, 1 February, the Rector Major met Dili's Past Pupils of Don Bosco and, in the afternoon, at Fatumaca, he met members of the Association of Mary Help of Christians, together with all the members of the Salesian Family of the country's eastern part.

In the first of two meetings, before circa six hundred Past Pupils, the President of the National Federation welcomed Fr Á.F. Artime, and presented him with the contribution offered by the Past Pupils to the nation. He reminded all that the country's  first President and the current President of the Republic are Past Pupils.  He also cited the project "Belun Ba Misaun Don Bosco" (Friends of the Mission of Don Bosco ) as an example of service to the spread of the charism among the people of East Timor. The Rector Major, by turn, thanked all those present for their commitment and testimony and invited them to always look ahead towards serving others.

The festive meeting with the Past Pupils extended over time the Salesian joy already experienced on 31 January for Don Bosco's feast. On that occasion, the X Successor of Don Bosco presided over the Eucharist for about 5000 faithful - including the President of Timor Est, Francisco Gutteres Lu Olo. In his homily,the Rector Major invited: thanks to God for the gift of Don Bosco; thanks to God for the great missionaries who brought the Salesian charism to East Timor; finally, for all to seek "the true happiness of life", whose name is Jesus.

The visit of the Rector Major to East Timor sees the whole nation participating, again like the great manifestations of joy that characterized the pilgrimage of the relics of Don Bosco in the country, in 2011.

Thanks to the work of the Delegate Social Communication by ITM, Fr Jose de Sa, and to the precious work of many past pupils, the Animation Visit of the Rector Major is receiving prominence in the country's main newspapers and radio and television stations.