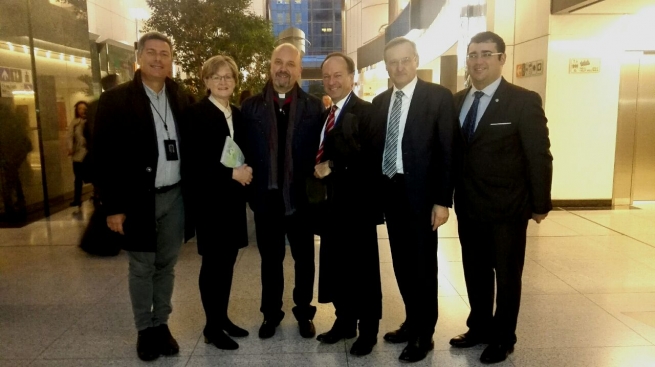 (ANS – Bruxelles) – For the second time on the commemoration of the Feast of Don Bosco, Don Bosco International (DBI) has a series of events in the European Institutions. This initiative counted with the presence of Fr. Stefano Martoglio, Regional Councillor for Europe – Mediterranean Region.

During the presence of Fr. Stefano Martoglio in Brussels, we had the occasion to present the work that Salesians do in Europe and worldwide focusing in the Italian-speaking stakeholders that DBI usually works with.

Our institutional journey started celebrating the Eucharist in the European Parliament for all the members of the Parliament who wished. Prior to it, we manage to meet with Ambassador Pugliese, Permanent Representative of Italy in the EU and the Vicepresident of European Parliament, Mairead McGuinness.

In this intense agenda, also kept some space for the church authorities, while meeting the Nuncio towards European Union Mgr. Alain Lebeaupin, the Secretary General of COMECE, Br. Olivier Poquillon, and Mgr. Gianni Ambrosio, Vicepresident of COMECE and Bishop of Piacenza-Bobbio.

The last moment on the agenda was our meeting with OHCHR – Office of the High Commissioner for Human Rights (UN office Brussels) that presented us their plans for the commemoration of the 70th Anniversary of the Declaration of Human Rights and showed a clear will to cooperate with Catholic Church and the Salesian Congregation.

The intense programme continued in the afternoon with the first coordination meeting of Catholic Youth NGOs, to follow up on the congresses Re-thinking Europe and the Forum of Catholic inspired NGOs, and to see how to better coordinate in advocacy spheres.

Our celebration concluded with the Holy Mass in the Chapel for Europe, an ecumenical space managed by the Jesuits, to share the feast with all the people with whom DBI cooperates with. It was a very nice celebration by Mgr. Albert Vanbuel, sdb, who shared his experiences as Salesian missionary bishop in Central African Republic and the wonderful musical accompaniment of Trio GPS, that brought the traditional joy of a Salesian celebration, the participation doubled compared to the previous years, due to the higher activity that Don Bosco International developed in 2017.