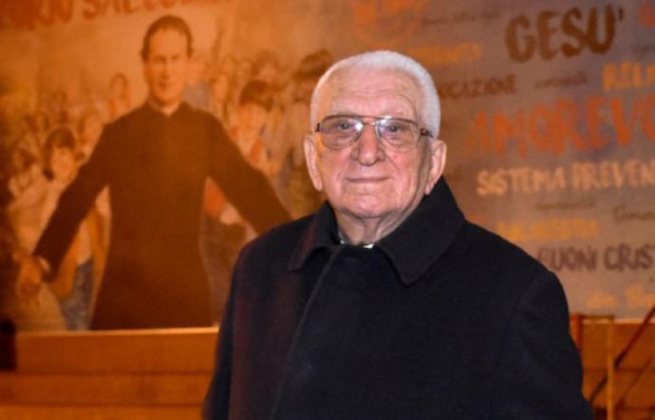 (ANS - Catania) – He will be 100 years old next May and at his venerable age, still very lucid, he works as Delegate for the Past Pupils of the Union of Salette-San Cristoforo, in Catania: Fr Rodolfo di Mauro, Salesian since 1938, a priest for over 70 years, with a store of incredible memories linked, above all, to the Salesian house "Salette" in Catania.

Fr di Mauro outlines his biography by linking it to history's great events. He was born on May 18, 1918, during the Great War, in Militello. As a child he was enrolled in the fascist youth organs; the Great Depression of 1929 forced him to suspend his studies, which he resumed only thanks to a brother Carabiniere, an Italian military police, who kept him in the Salesian Institute of Pedara. He then taught in Marsala, where, during the Second World War, he was saved from a bombing by chance.

He arrived in Salette in 1947. With the other Salesians he founded the oratory and the musical band and took care of the poorest of the poor. "We were feeding eight hundred children. We would cook in a pot stirred with a stick."

Among the many things to narrate, his words touch on criminality. The district's mafiosi, he has known them all and, in such a context, had to earn respect. "Once a man threatened me," he says, "told me 'if it were not for that white collar you wear ...'. I took it off immediately and replied: 'what can I do for you …?'"

Fr Rodolfo has looked after so many lives on the brink: sometimes the distorted logic of crime prevailed, but in most cases Don Bosco's teachings have been successful. As in the case of a nephew of a mafia clan leader who today is studying as a priest in Messina. And then the many exemplary biographies: university professors, doctors, engineers, actors, typographers such as Salvatore Caliò, President of the Past Pupils Union, who deals with social assistance and who has created the "Quartiere Vivo" award, in view of the one hundred years of Fr Rodolfo, too.

At the age of 100, Fr di Mauro can only be grateful to God. "I have to thank the Lord for what I have done. I have gone from oil lamps to the digital age. Every day that passes is one more day." And he concludes: "To Salette, I have given and received a lot, and above all I have learned not to be afraid of anything, not even of death."