Uganda - Fr Arasu: "These vulnerable young people are the reason for our being here" 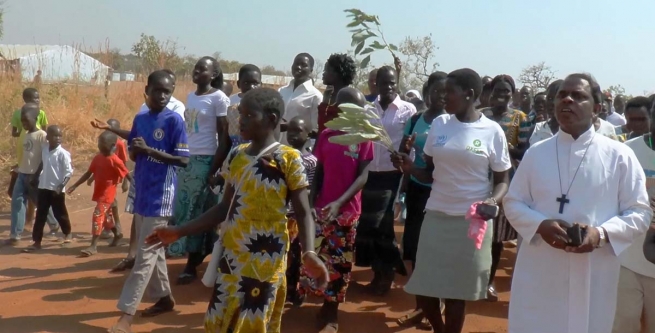 (ANS - Palabek) - The presence of Salesians among South Sudanese refugees in the Palabek refugee camp is one of the emblematic and symbolic presences of the Congregation on a global level. Dr Lazar Arasu is on the front line, with many years of mission in the country behind him.

Fr Arasu, you have been in East Africa for many years. Tell us about your life as a Salesian in Uganda.

I am originally from the South India Province of Chennai and have been in East Africa since 1990. After my ordination I worked in Uganda, mainly in school ministry. In 2017 the Rector Major reported that there were a million refugees in Uganda and he invited us Salesians to reach these refugees and to work in Uganda.

What is currently the situation of refugees in Palabek, Uganda?

Statistics indicate that there are 41,000 refugees from South Sudan and the number continues to grow. The representative of the Government, during the talks we had with him, told us that they expect to receive up to 150,000 refugees from an area of over 20 kilometers radius.

Why is the Salesian presence at Palabek of such import?

86% of the population in the refugee camp are women and children. They're young. More than 60% are teenagers or children. There are hundreds and thousands of children under the age of three. These vulnerable young people are the reason for our being here, the motivation for our commitment to education and evangelization. We must take care of them and give them a full and integral formation.

How can Salesians accompany refugees in Palabek?

Besides the works of spiritual mercy there are the works of corporal mercy and here there are people who need all these efforts. People who are hungry, thirsty, do not have a home, have no clothes, no education and need our attention and care. I am happy to see that in a short time, let's say these seven, eight months, our Congregation has been making great strides in the work here among the refugees.

The Rector Major together with his Council and the other leaders assigned four confreres the task of working full time in this camp. We have started initial schooling and other pastoral activities. I hope and pray that, with the help of Don Bosco, we will succeed in this service.

Video of the interview.