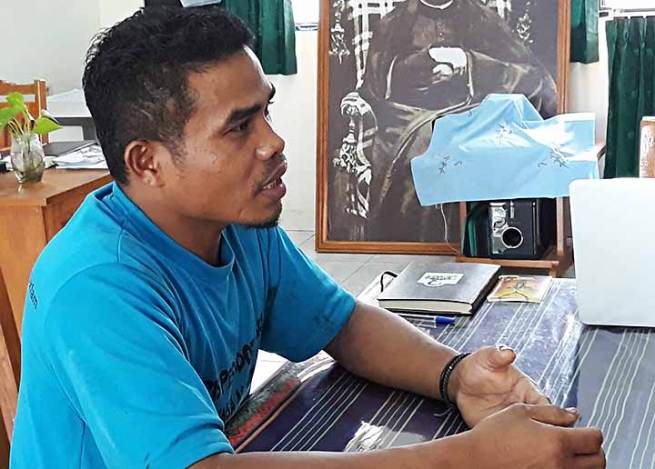 (ANS – Sumba) – Thirty-three years after the first Salesian presence in Indonesia (Jakarta), the large tree of the Indonesia Salesian presence has grown into seven centers in Java and Sumba Island. The most numerous community hosts 7 perpetually professed confreres (4 Priests, 3 Brothers), three working trainees, and 8 prenovices, this in the remote, poor and Christian majority island of Sumba (Rector Fr. Adie Prinanto).

Sixteen years after the first confreres landed in Sumba (2002), our presence has rooted itself solidly ineducation thanks to the BLK Budi Daya Don Bosco (Vocation Training Center), the Oratory and the Secondary Technical School (SMK) Salesian Don Bosco, which opened in 2014. It is truly a good place to form our younger generations: the novitiate stage was present in Sumba for the past 12 years; now there are only Aspirants and Prenovices. Beyond the walls of our large rural compound, our Salesians are involved in a number of support projects to the local Church with youth ministry and the Eucharist in remote mission stations.

Below, a recent interview with one of the first Don Bosco Alumni of Sumba, Pius Dappa Ole (teacher, Carpentry section of the VTC) who first got in touch with Don Bosco in 2002; he offers profound insight into the charismatic growth of Indonesia Valdocco.

When did you meet Don Bosco for the first time?

I joined Don Bosco VTC through the ADM Sisters of Sumba, in my home village. I wanted to learn carpentry, and I approached Fr Andres Calleja in 2003 and was soon accepted to the Don Bosco boarding house and started a regular life of common prayers, training for technical skills, discipline, recreation time with the Salesians. Our first group of trainees was of 32 students and only 13 of us concluded the first course after two years. Since the transfer of VTC in 2006 from the cathedral site to the Don Bosco compound I became a teacher. Now I feel happy that I can give back the skills received from Don Bosco and teach younger generations!

What do you treasure most in the Bosconian education in Sumba?

I appreciated most our spiritual formation, how to arrange our own time within the 24-hour timeframe, how to be orderly, how to forge close relationship with the Salesians who always showed us the way to becoming good person.

What makes you happy as a Lay Mission Partner of Don Bosco?

I feel that I can also give skills and knowledge to other young people to make them better, like the vision and mission of Don Bosco. I had a dream of Don Bosco: I met him at the foot of the hill. DB gave me many coconuts and asked me to share with other young people, but in order to share, I needed to climb the hill. And I did! The meaning of this dream… Before this dream I had an already grateful heart for all the things I received from DB. I could not imagine what my life would be without Don Bosco.

You dream about Don Bosco Salesian family in Sumba?

First, we need to get to know our Don Bosco VTC more within local society and visit the parishes like in the past!

My second concern is about our graduates who are not yet employed. It would be very good to gather a small group of Alumni (Carpentry section) with some seed money to start-up and organize a small carpentry in the town.