Rwanda - The Rector Major: "a young man who has no God within himself cannot be truly happy" 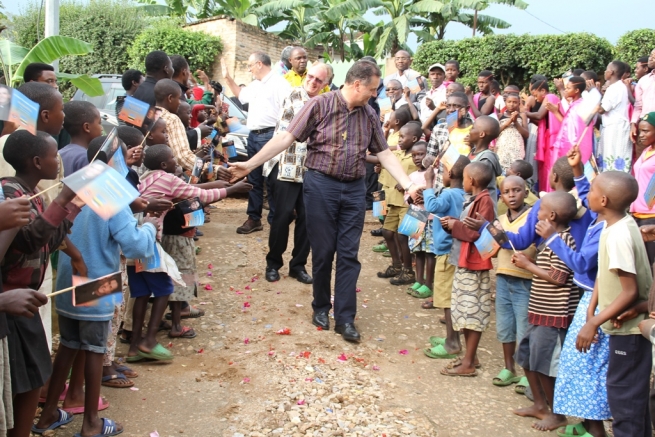 (ANS - Kabgayi) - "You have chosen a very beautiful Congregation, the same one dreamed of by Don Bosco ... Which tries to take care of young people as he did ... A congregation that needs Salesians who are authentic and available." With these words, yesterday, March 14, the Rector Major, Fr Ángel Fernández Artime, adressed the Salesian novices of the house "San Luigi Versiglia" of Rango, in Rwanda, where he is for his Animation Visit to the Africa-Great Lakes Region (AGL).

After meeting with the novices, also yesterday afternoon, the Rector Major reached the Salesian center of Kabgayi to meet the young and members of the Salesian Family and, later, to meet with his confreres of Rwanda.

To the young, who welcomed him with great tributes and manifesting their joy through art, Fr Á.F. Artime said: "music, songs and dance characterize all the houses of Don Bosco. You are always welcomed by Don Bosco."

Subsequently, in the meeting with his confreres, the X Successor of Don Bosco congratulated the Salesians of Rwanda for the many pastoral activities brought forth and he also thanked several Salesians from the Democratic Republic of the Congo, Province of Central Africa (AFC), as a sign of communion in the mission. In the evening, finally, also the bishop of Kabgayi, mgr. Smaragde Mbonyintege, and members of other orders and congregations, came to the Salesian house to meet Fr Á.F. Artime.

This morning, Thursday 15, accompanied as always by his Secretary, Fr Horacio López, the Rector Major went to visit the house of the Daughters of Mary Help of Christians in Rugunga, near Kigali, and was welcomed with the usual festive air by the whole educational community. Then, after visiting the museum of the FMA school, he went to the house of the Salesians in Kigali, where there were young people of Salesian presences from all over the country, together with a delegation from Goma, D.R. Congo, AFC Province.

In the Eucharist that followed, Fr Á.F. Artime indicated to young people the importance of being authentically true Christians: "Don Bosco said that a young man who does not have God within himself cannot be truly happy". In the afternoon the dialogue between the Successor of Don Bosco and the young Rwandans continues with a meeting.