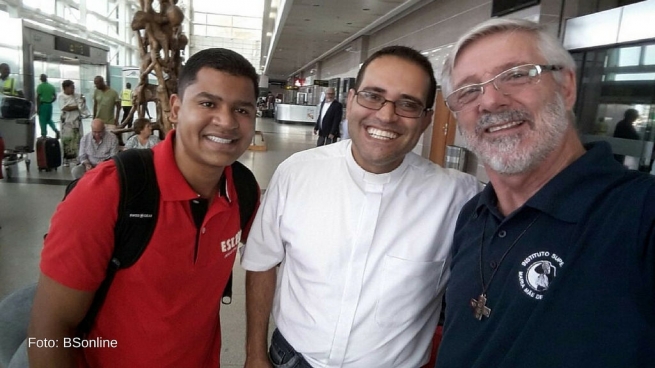 (ANS - Moatize) - Canção Nova, 25th group of the Salesian Family, has landed in Mozambique with a specific mission: to manage "Radio Don Bosco" (RDB), a Salesian radio broadcasting station based in Moatize, in the province of Tete . The two missionaries from Canção Nova, Fr Ademir Lucas and the seminarian Lucas Paulino da Silva, arrived in Maputo on the morning of Saturday 10 March. They were received at the airport by Fr Marco Biaggi, Superior of the Mozambican Vice Province (MOZ).

On the same day, they were introduced to the coordinators of MOZ Social Communication and, after various activities, went to Tete where they will work and live, ie the parish house of the parish "St John Bosco", near the RDB studios.

Canção Nova is a Brazilian Catholic community founded in 1978, and follows the lines of the Catholic Charismatic Renewal. Based in the city of Cachoeira Paulista, it has developed an important radio and television system, which extends to other countries such as Portugal, Italy, Israel, France and Paraguay.

The community was founded by Fr Jonas Abib, having as co-founders, Luzia Santiago and her husband Wellington Jardim. Fr Abib was a member of the Salesian Congregation for several years and then had to leave it to later found the new movement, which on 3 November 2008 obtained pontifical recognition, receiving the approval of the Statutes before the Holy See. On 21 January 2009, finally, the "Canção Nova" Community was officially included among the groups of the Salesian Family.

RDB, which the two missionaries come to serve, is a Christian radio based on the values ​​of the Gospel announced by Jesus Christ and in communion with the Catholic Church. It is an activity directed and promoted by the Salesians that aims to educate and evangelise young people and popular culture, training and informing to help them grow as "honest citizens and good Christians."

RDB was launched in 1994 on the initiative of the Salesian Carlos Marques and a group of young people from the Moatize mission, such as "Radio Escuela". The 11 January 2011 it was authorized by the National Institute of Communications of Mozambique to broadcast at Villa de Moatize on a frequency of FM 101.1 Mhz, and has since been officially called "Don Bosco Community Radio."