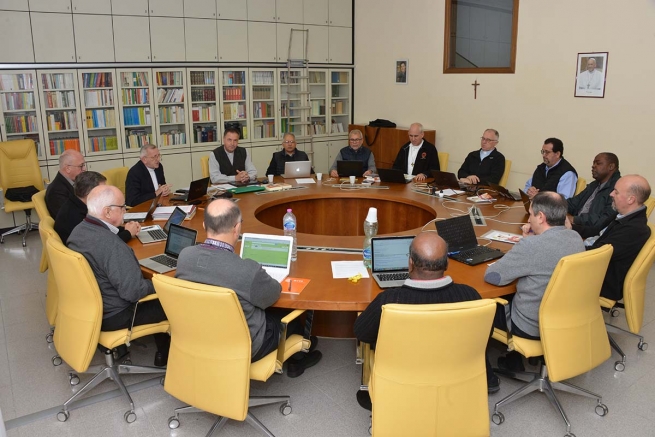 (ANS - Rome) - Ordinarily, in spring and in autumn, the Intermediate Council takes place, with the participation of the Rector Major, his Vicar, the Sector Councilors (Formation, Youth Ministry, Social Communication, Missions and Economics) and from time to time with a Regional Councilor. In said intermediate sessions, specific topics to be submitted to the General Council in the plenary sessions are studied, with the GCs scheduled in summer and in winter. However, from March 19 to 28, an intermediate session is currently in progress with the Rector Major and the whole General Council, the task of this session being to prepare the General Chapter XXVIII (GC28).

The obligations of this preparatory session are indicated by our General Regulations in articles 111 and 112. The Rector Major, Fr Ángel Fernández Artime, and the General Council must choose the topics and the purpose of the GC28, its starting date and location; no longer in possession of the General House of Via della Pisana, the choice of the location is especially important. All this will be indicated by the letter of convocation of the GC28 which will appear in the next issue of the Acts of the General Council.

To the Rector Major, then, the responsibility of choosing the Regulator and the constitution of the technical commission, which has the task of indicating the manners of participation of the Salesians, of the Provinces and especially the Provincial Chapters. It will also be important to identify the methodology of how these chapters take place.

The eight General Team Visits, celebrated in the seven Regions, were undoubtedly an opportunity to listen to the voice of the Provinces, through the participation of Provincials and Provincial Councils. Already these convocations are a great help in discerning in the General Council the priorities of the Congregation in response to the needs of these current times, of the Church and of the young.