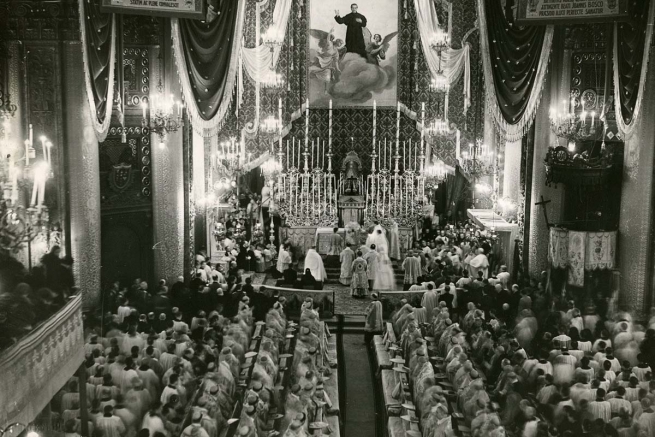 On 1 April, 84 years ago, then also Easter, Pope Pius XI proclaimed Saint Don Bosco a saint. Thus ended the long process of beatification and canonization, begun in Turin on 4 June 1890.

The "Pope of Don Bosco Saint" had as a young priest had the pleasure of sitting at the table with Don Bosco and getting to know the Oratory he founded at Valdocco. He got to know in detail the great work Don Bosco had done for poor and abandoned children, why he did not hesitate to support the process of canonization of his friend Don Bosco, or his spiritual children. It is worth noting, too, that he also gave impetus to the cause of beatification of Dominic Savio.

Fr Eugenio Ceria, SDB, remembered the day of the Canonization of Don Bosco with enthusiasm and his writings about that day are a poem to the Saint of the Young. "Rarely, perhaps never, has the Vatican Basilica contemplated an Easter joy so young, so fresh, as unexpected as it did at Easter 1934. With that Easter, the Jubilee of the Redemption came to a close, and the holiness of an apostle who brought the benefits of Redemption to an infinite number of souls was celebrated."

This poem of love continued: "From dawn a cosmopolitan multitude from all parts of the city headed towards St. Peter's. At six o'clock on the dot, the passage through the barriers was opened by the guards at the entrances, barriers which contained the impatience of the crowd, and the guards checked for entrance tickets; at 7:45, the sixty thousand people the temple was capable of hosting had already entered. At least another one hundred thousand would be left out. A show unique in the world! People of all conditions, gender and age, priests, clerics, religious, students, professionals, workers, elegant ladies and simple women of the city, with an extraordinary difference in looks, ways of dressing, of languages, were pressed together under the vaults of the basilica and the largest square in the world, united in a unique feeling with Don Bosco and Pius XI."

The canonization of Don Bosco inevitably points out the perennial validity, to today's educators, of the Preventive System, which is founded on reason, religion and loving kindness, destined to the edification of the honest citizen and of the good Christian: a verified educational system, in little more than a century, by a legion of champions of youthful holiness such as Dominic Savio, Laura Vicuña, Ceferino Namuncurá, the five young martyrs of Poznań, Alberto Marvelli, the young Spanish martyrs ... and all the young people to come in the future, near and remote, "because our Congregation has more future than past," reiterated the current Rector Major, Fr Ángel Fernández Artime. Indeed.