Lebanon - Rector Major: "What strength, what resistance, what dignity in these people I have met!" 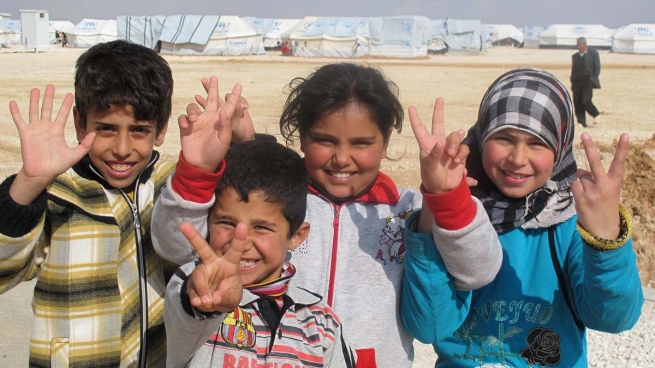 (ANS - Al Fidar) - Yesterday, Wednesday, April 4, the Animation Visit of the Rector Major, Fr Ángel Fernández Artime, to the Salesian presences in Lebanon continued with his visit to Al Fidar where a Vocational Training Center and a reception house offering informal educational courses is located. The Rector Major spent the whole day talking with the Syrian and Iraqi students and the refugees from the center.

Fr Á.F. Artime was extremely impressed by his meeting with the refugees and on his Facebook page he expressed all his emotional involvement:

"The testimony of those young families, married couples with young children, and young people (more girls than boys) who left their country and are now in Salesian houses ... I am talking about refugees of Syrian and Iraqi origin. Today was a very special day. I was in a Salesian oratory with a hundred boys and girls, with several young married couples with their children, with a number of young refugees also from Syria (as were the young families) and with a group of 12 girls and two boys coming from Iraq. And I must tell you that  I was very much "touched" in my heart by their dignity, by their ability to overcome suffering. They danced and sang (in a very beautiful way) ... because they do not allow anything or anyone to turn off their smiles, at least in many moments. And I am happy because Salesian houses, like other houses of the Latin Church and the Maronite Church, are a protection, a refuge, for the displaced in a country, Lebanon, which is at peace, but which is in a state of very difficult religious and social equilibrium. And I encouraged my Salesian brothers, Salesian sisters and the Salesian Family to continue to SIDE WITH THE POOR AND THE 'OUTCASTS' - as Pope Francis says - ALWAYS. ALWAYS WITH THEM."

In the afternoon the program of the Rector Major's visit continued with the traditional appointments of each animation visit: the meeting with all the Salesians present in the country for an update on the life of the Congregation and to listen to their concerns and their observations on the local reality.

At the end of the day there was a meeting with the local Salesian Family, the recitation of Vespers and the thought of the Salesian "Goodnight."