Guatemala - "Hogar Pope Francisco": a blessing for the poorest 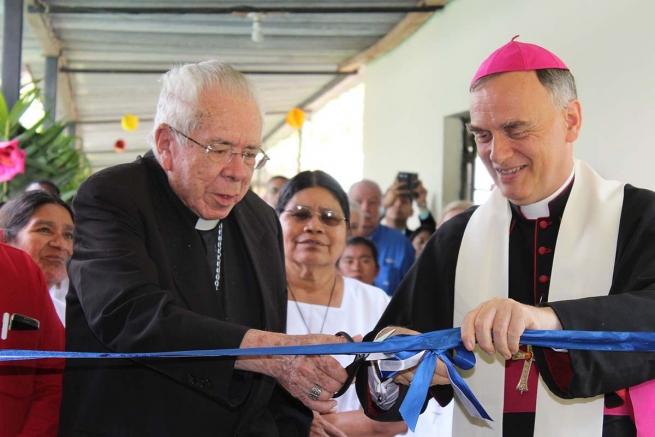 (ANS - San Pedro Carchá) - The "Sisters of the Resurrection" are an indigenous Q'eqchi religious congregation. Established in San Pedro Carchá, Guatemala, in 1977, on the initiative of the Salesian Fr Jorge Puthenpura, it was welcomed as the 22nd group of the Salesian Family in 2004. The Congregation promotes projects of evangelization and the promotion of human values in various geographical areas, including Alta Verapaz, Quiché, Izabal and Petén.

Fr Puthenpura, the founder, and the Sisters of the Resurrection reopened the "Hogar Pope Francisco" structure which takes care of malnourished people and the needy in the village of Tz'unu'z. Mgr. Nicolás Thevenin, Apostolic Nuncio in Guatemala, and Msgr. Gerardo Flores, bishop emeritus of Veracruz, took part in the event.

The home for minors began its activities 35 years ago, but the Congregation was later forced to suspend its services. However, on seeing the need for such a center for the local population, the Sisters of the Resurrection decided to reopen it on July 28, 2014, under the name "Hogar Papa Francisco."

The center welcomes people in need in two ways: a permanent care center that is offered to elderly and abandoned people; and temporary assistance for those recovering their health as a result of some illness. Both forms of assistance are free of charge. They also provide help in the administration of medicines, meals, accommodations, clothes washing, pre- and post-natal care, post-operative convalescence, transfer of patients to public hospitals or clinics ...

Currently the house can accommodate up to 25 people with their respective companions. The direct and individual assistance and care are offered by four sisters of the Congregation, who strive to maintain the climate of home and family throughout their services.

The ceremony of inauguration and blessing of the premises was attended by many local farmers, elderly, young people, children and families with limited resources who shared their testimony on being treated and rehabilitated at the center. Also present were friends and collaborators of the "Talita Kumi" Foundation, civil and religious authorities of the country and representatives of groups that support this service to the most disadvantaged.

"The Congregation invites all those who wish to contribute through voluntary service or donations to participate, so that this center doing good for the poorest can grow," said Mother Zoila Caal, Superior of the Congregation.