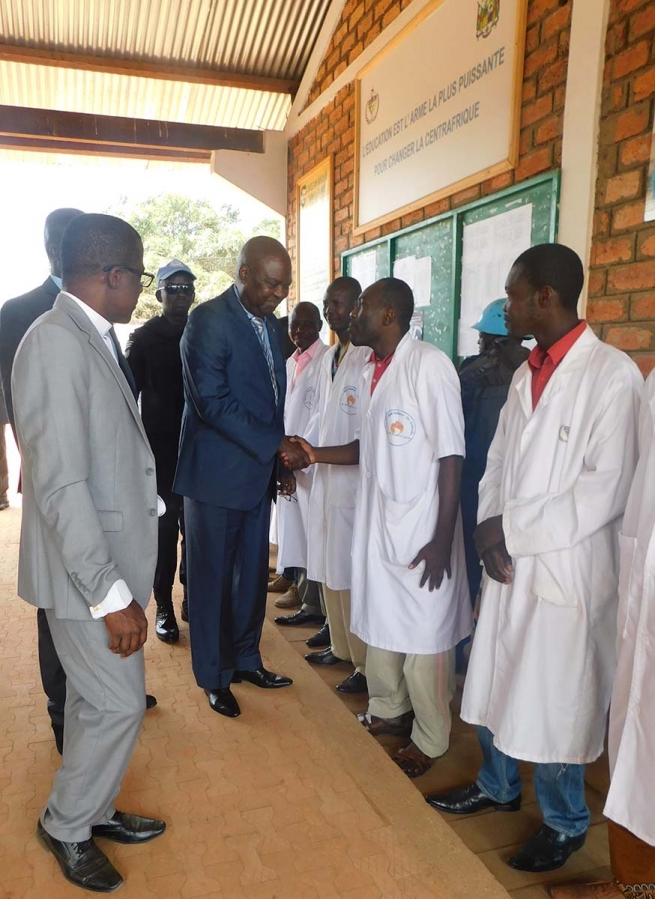 (ANS - Bangui) – This past April 27, the Prime Minister and Head of the Government of the Central African Republic, Hon. Simplice Salomon Sarandji visited the "Don Bosco" secondary school in the district of Damala, near the country's capital, Bangui. The Prime Minister came in response to the invitation sent to him by the leaders of the school's student cooperative.

During an interview granted to the journalists present, Dr Sarandji underlined his considering the visit to the Salesian Institute a privilege, a school, he described, that participates and helps the government in its action to rebuild the country. His visit therefore wished to represent, in his words, a form of recognition and encouragement to the Salesians of Don Bosco for all the work they have done in the field of education and the formation of young people in the Central African Republic.

In fact, via its Center for Vocational Training, the Lyceum and the Youth Center, the Salesian presence in Damala has always worked for and towards the development and recovery of young Central Africans, with much effort and commitment, most especially after the last time of crisis the Country has recently experienced.

Among its activities, for example, is the Center for Vocational Training which, in collaboration with several NGOs, has allowed several former child soldiers, enlisted in the militias, to benefit from vocational training courses wherein they received an education, and enabled them to enter the world of work and, consequently, a chance to give up arms.

The high school, for its part, even during the harshest times of clashes between various factions, has always continued to offer its educational program uninterruptedly, much to the benefit of the young Central Africans who, indeed, attend the center.

And as far as the Youth Center is concerned, it only suspended its activities when it came to welcoming displaced persons fleeing from battle. Otherwise, it has continued to offer spaces for sharing and recreation for local children - all the more necessary, the more critical the external context is, of course.

These, therefore, are the actions through which the Salesians of Don Bosco actively collaborate in the "reconstruction of the country", actions that have earned the attention and recognition of the Central African Prime Minister who, in his visit, asked not to speak only about what is wrong in the country, but also to mention the many good things that are being done through institutions such as Salesians, where men and women of good spare no effort towards the reconstruction and development of the Central African Republic.