Italy - Rector Major: "If we change the life of only one young man, we have done a great job" 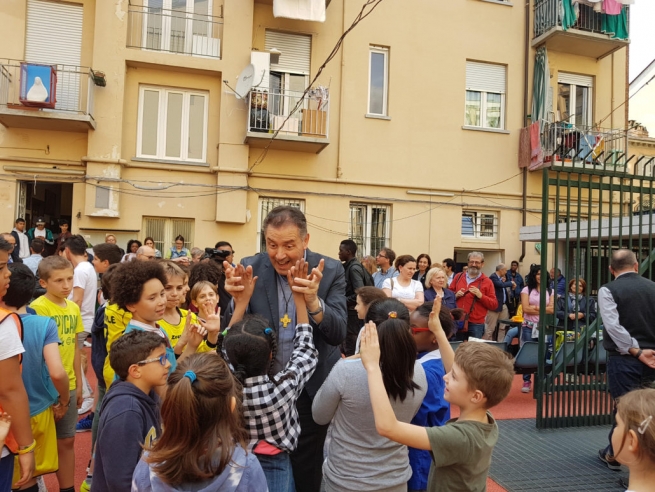 (ANS - Turin) - In the last appointment of his Animation Visit to the Special Circumscription of Piedmont and Valle d'Aosta, on Monday afternoon, 21 May, the Rector Major met members of various groups of the Salesian Family, a way of getting to know the reality of Street Education promoted by the San Luigi Oratory in the Parco del Valentino. He also inaugurated the innovative Salesian training course "Ri-generation Lab", which allows the most disadvantaged young people to learn how to repair and regenerate household appliances.

At the first of the three appointments, more than 400 people attended the "San Giovanni Evangelista" Institute, where they welcomed Fr À.F. Artime with a joyful cheer and briefly talked with him.

Then, at the Parco del Valentino, there was a moment to talk and listen to the Pastoral Educational Community that animates the activities of Street Education, with the young guests of the community for Unaccompanied Foreign Minors and with the families who accompany them.

The third stage of the visit took place at the "Santi Pietro e Paolo" oratory, where the 10th Successor of Don Bosco, welcomed by a festive crowd of children and young people, inaugurated the "Ri-generation Lab", a workshop conceived with the help of the Impresa Astelav, a company, to teach young people in need to repair and regenerate household appliances.

"As is, when a child feels welcomed and esteemed, he can give his best; if, instead, he feels to be a weight he seeks forms to escape from reality with the risk of falling into a network of deviance," said Fr Mauro Mergola, Director of the "San Luigi" oratory.

The young people taking part in the new project are boys between 16 and 18, who do not know Italian, or come from difficult family contexts, mostly foreign.

The new educational-training format, carried out by CNOS – FAP, the National Center for Salesian Works - Vocational Training, the Salesian Youth Ministry, the "St. Peter and Paul" Parish and the "Astelav" firm, proposes to put into practice values ​​that are based on the circular economy: to create jobs for those in difficulty and put appliances on the market that were destined for scrapping, thus safeguarding people and the environment.

Great was the satisfaction of the Rector Major before this new initiative: "If we change the life of even one young man, we have done a great job."

The video of the inauguration ceremony of "Ri-Generation Lab" is available on Facebook.