RMG - Africa: a continent of young people and of hope
Featured 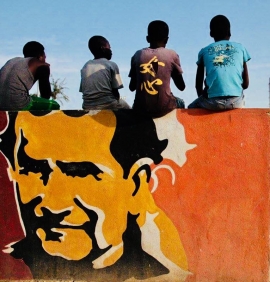 (ANS - Rome) – Each year, on May 25, Africa Day is celebrated to commemorate the foundation of the Organization of African Unity (OUA). It is also an important and meaningful date for Salesians, given the presence of hundreds of Salesians working on the continent. According to data, "Africa is growing in Salesian vocations at an accelerated pace compared to the other regions of the Salesian world. It could be considered as the youngest part of the Congregation," explained Fr Silvio Roggia, SDB, of the Dicastery for Formation. "This reality offers possibilities of service in favor of children and young people."

Africa is calling out to the rest of the world to be more attentive towards the great continent; often only the negative aspects are highlighted: wars, hunger, disease ... But Africa is above all a young and youthful continent with an unimaginable variety of landscapes, ethnicities, languages ​​... Salesian missionaries and native Salesians work in most countries on the continent to contribute to the development of the population through education.

Africa is the cradle of humanity, the third largest continent on the planet and the one with the largest number of countries: 54. Inhabited by over 1.2 billion inhabitants, with the planet's youngest population, but time and time again, what's reported is is news about wars, diseases, drought, hunger and corruption. And yet Africa has all kinds of natural resources, an average of 6 children per family, more than 3,000 different ethnic groups and there are over 1,500 languages ​​spoken ... This is the greatest wealth of Africa: its people.

In the Seventies, the Salesians established "Project Africa", which meant implementing the most important action carried out by the Church on this continent. The Congregation has gone from being present in 6 countries to being in 43. Today in Africa there are over 1,200 Salesians, 100 schools, 80 Vocational Training Centers, 29 reception centers for children at risk, 200 oratories/youth-centers, 7 centers for working with refugees, 10 hospitals or medical dispensaries and 4 community radios. And these are just some of the data of the Salesians' work in Africa.

In some countries, as in the Democratic Republic of the Congo, the Salesians have been working alongside the population for over a century, because this is the foundation and basis of the missionaries' work: being with people who need help. There have been wars, epidemics, famines and natural disasters, but the Salesians have always remained alongside its people.