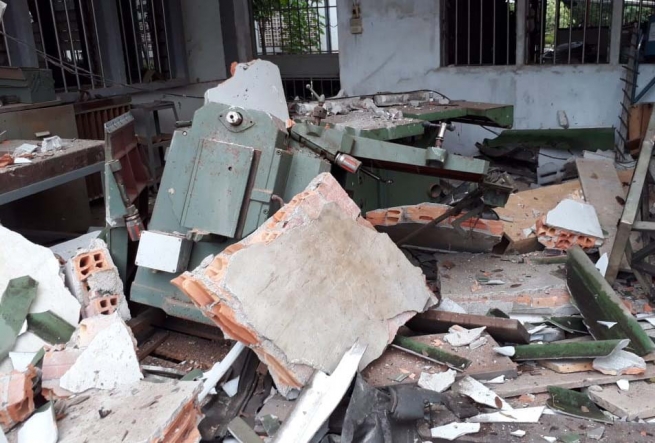 (ANS – Sihanoukville) – A powerful explosion happened today at the Mechanics Department of Don Bosco Technical School in Sihanoukville at about 13:10 local time and took the life of Teacher Sarat Seng, Manager of the Mechanics Workshop. Three other persons, 2 students and a teacher, were brought to the hospital according to the latest updates. One student lost his right hand. It seems have been a gas explosion, probably from the machines of the Mechanics Department. At the moment, the Sihanoukville Police Department is at the school campus conducting investigations of the incident. The Salesian Community has closed the school for the time being and asks for prayers and solidarity, especially for the family of Mr. Sarit Seng, his widow and two little children.

The very powerful explosion took place behind the Mechanics Department and affected most of the campus, breaking windows, roof tiles, and affecting the hearing of the people nearby, some dazed from the loud explosion. The school solar panels were not affected, as they are located on another building. In the beginning, people first thought it was lighting, common in Sihanoukville.

The Manager of Electricity in Sihanoukville said to Teacher Seyha of Don Bosco Kep that it seems that Mr. Sarat Seng was operating a gas device they used for welding. When the explosion took place, fortunately for others, the students were standing at a distance. Mr. Hans Kluecle, SES expert in construction – an expert in explosions – saw the photos and believed it seemed to be a bottle, like an extinguisher.

Three other people were directly wounded: another teacher and two students. They are at currently being treated at the hospital, in good recovery, but unfortunately one of the students has suffered the loss of a hand.

All students were summoned to the school hall and dismissed until new further notice.

Members of the Sihanoukville Police Department came to the school about one hour after the accident and they are now inquiring.

The worry now is to support the family of Mr. Sarath, as well as the wounded persons.