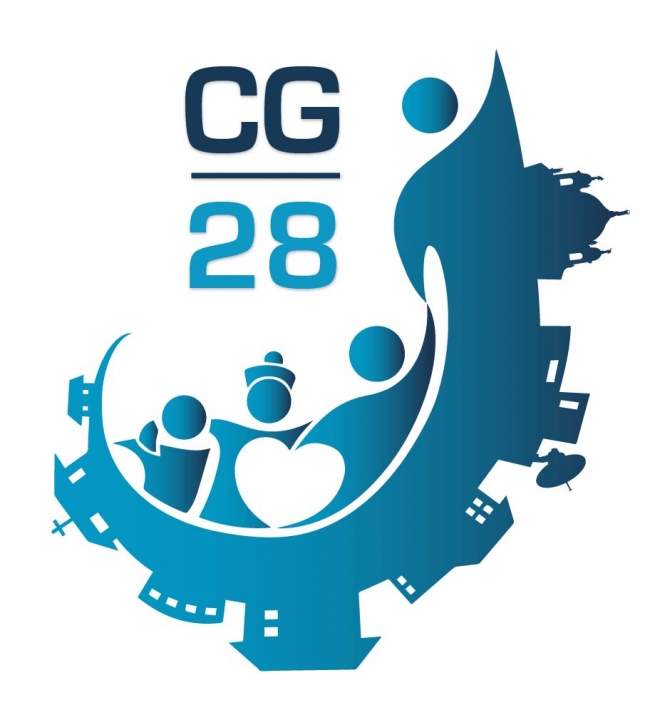 "We need to commit ourselves to giving absolute priority to the Salesian mission with the young people of today in order to be as he was, 'signs and bearers of the love of God for young people especially those who are poor.' This priority or special concern for the most needy teenagers and youth in today’s world, that in a certain sense is different from the world of previous decades,  objectively conditions our mission," wrote the Rector Major in the letter of convocation of the GC28.

With these orientations well in mind, a logo was designed to represent a full range of Salesian centers and works across the globe, which - if read from left to right - ends with a representative image of the Basilica of Mary Help of Christians of Turin, a city the General Chapter returns to after 62 years.

The logo suggests in a dynamic manner that every spiritual Son of Don Bosco must have creativity, service, and a passion for working with young people and devoting oneself entirely to the young.

In the middle of the logo are features that refer to the three elements of the next GC28: the priority of the Salesian mission among the young people of today, the profile of the Salesian figure for today's young people and the work done and to be done together with the laity in missions and in formation.

The logo also presents several figures: the young, the laity and the Salesians, taken by the hand of Jesus, who accompanies the Salesian mission, clearly showing how the most important aspect of the work is the "Da mihi animas".

The color was chosen specifically to highlight the dynamism of the mission, and the blue hue is also a reference to Mary Help of Christians who leads to heaven.

From the Province of Ecuador, Marcelo Mejía stated that the logo was created by Marco Ospina, of the "Editorial Don Bosco" of Ecuador. "We feel committed to the journey of the Congregation and we offer the logo to recall the question presented by the 10th Successor of Don Bosco: what kind of Salesians for the youth of today?"