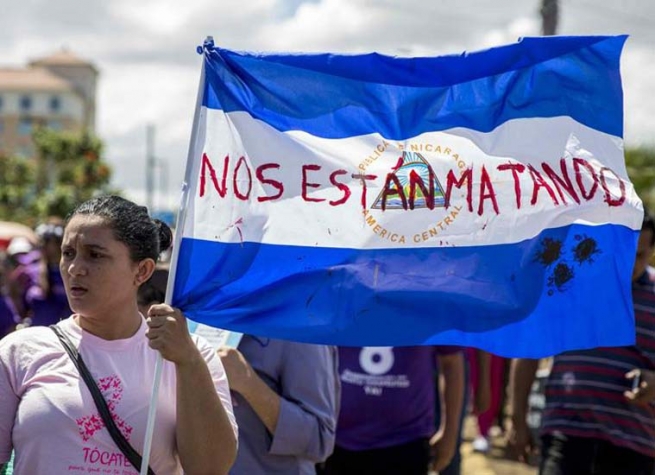 (ANS - Granada) - On the night of June 5, the city of Granada was in chaos. The shops were looted and several companies were set fire to and burned. The following morning Granada woke up desolate. Food and basic necessities have started to become scarce; shopkeepers, to avoid being looted, have taken away their wares and with people worried about food supplies, supermarkets are being emptied.

In the area of the Don Bosco Institute, the situation is under control. The streets are still closed by the barricades. The chapel is only opened for Mass and then closed again.

In Masaya the local population continues to fight. The Salesians are close to the area of the clashes and the Don Bosco Institute has had to close its doors. The same situation exists in Managua, where the Don Bosco Youth Center is located.

The police are joined by paramilitary groups and the “Sandinista Youth” who fight against protesting people. The request of the people of Nicaragua is clear: the renunciation of Daniel Ortega to holding power.

"In Nicaragua and, especially in Granada, we all know each other. In the attacks, no one is identified, but we clearly know who they are. There is a lot of attention to the protests, because the opposing faction is infiltrating the groups of ordinary citizens. We are all very careful," says a citizen who wished to remain anonymous.

On the night of 6 June, an attempt was made to loot a supermarket. The local citizens came together to defend it and two people were injured. As a security measure, three barricades were erected near the site of the incident.

There have been attempts to burn down the municipal market. But the inhabitants of the area have prevented it. The streets of Granada remain closed. People can only move on foot.

"We make public our repudiation of the events that have occurred and condemn all acts of violence, vandalism and repression against the life and integrity of people and speak out in support of their right to express themselves peacefully in defense of justice and solidarity," said Fr Ángel Prado, Provincial of the Salesian Province of Central America, which also includes Nicaragua.

The episcopal conference is scheduled to meet the President. The bishops have invited all to join in prayer for peace before the Blessed Sacrament.

Over 50 days without peace in Nicaragua have gone by and more than 90 people have died. "We live with profound sorrow and great sadness what people are going through because of the violent repression that the government has unleashed against the thousands of demonstrators," added Fr Prado.