RMG - Youth, present and future of the Gospel in Europe
Featured 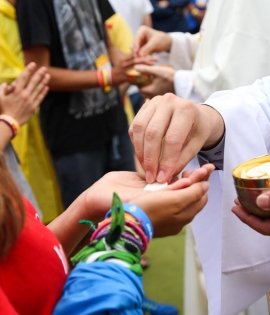 (ANS - Rome) - "Default" Christianity, as a cultural context, does not belong to the present of young people in Europe. The Church is aware of it and wishes to meet them in the reality of this context.

As expressed by the Episcopal Conference of England and Wales in the answers to the questionnaires sent in view of the Synod on young people, "the Church cannot start from where there are no young people and take them there where they do not want to go. But we can take them from where they are to where they would have never dreamed of being able to go." Also because it is necessary to recognize the tendency of young people today to devote themselves seriously to the discernment of their vocation, in a human and Christian sense.

The answers offered by all the Episcopal Conferences to the Synod questionnaires offer three scenarios: especially in Western and Northern Europe, many young people consider themselves as being far from the Church, are not interested and do not want to be disturbed. For the Church it is a challenge that recalls the resource of human respect and a pastoral empathy that places the non-believer at the center, even when any collaboration is lacking.

A second scenario deals with young people who have received the experience of faith, but then lost it. Some subsequently reconnect with the faith, often starting from friendship and the testimony of committed peers.

Thirdly, there is the scenario of young people who have made the choice of faith. There are two tendencies here: on the one hand, committed youths who ask the Church to be 'faithful' to the Gospel, 'clear' in the message; on the other, young people who insist that the Church commit to being 'modern', in dialogue with current events. It will be very important to grasp these two visions, not so much in terms of opposing elements, as in their complementarity.

The Italian Episcopal Conference included among its best practices with young people the experience of the oratory, citing Don Bosco's contribution. The heart of this proposal is the care of an educative community at the service of young people, able to make faith and life interact and to make young people experience healthy protagonism.

If they are called to discuss matters of faith and vocational discernment together, young people of any creed express the need for "fellow walkers", guides that respect the freedom of the young person, while providing the necessary tools for those processes.

The Church's choice to really walk together, synodos, with young people, is already an answer able to