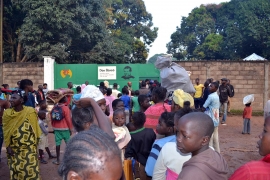 (ANS - Rome) - In 2017, due to wars, violence and persecution, there were 68.5 million people forced to flee their homes, with more than half being minors (53%); of these, about 40 million were displaced within their own countries and 25.4 moved abroad. For the Salesians, who have always worked in support of the neediest of young people, the data published for the World Refugee Day by the United Nations High Commissioner for Refugees (UNHCR) acts as new impetus for their commitment in the field.

The action of the Salesians is multi-faceted and takes place across the globe. To name a few, among the many:

Other significant initiatives take place in different parts of the world, sites where the spiritual Sons of Don Bosco continue to follow the Pope's invitation to the reception, protection, promotion and integration of people forced to flee their countries.