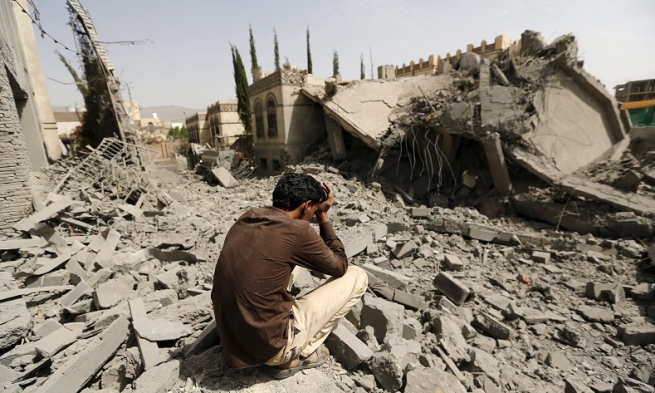 (ANS - Bangalore) - "With worry I follow the dramatic fate of the people of Yemen, already so exhausted from years of conflict ...". The Pope's words after the recital of the Angelus last Sunday have focused attention on a country exhausted by over three years of civil war, which has caused over 15,000 victims and forced more than three million people to flee: practically one of every 8 Yemeni today lives away from home. The Salesians of the Indian Province of Bangalore have served in Yemen as missionaries for several years, and today echo the Pope's invitation to prayer for the Yemeni people.

Fr George Muttathuparambil, current Provincial of Bangalore, speaks of the gravity of the situation and the urgency for prayer. "This war is unjust. People suffer in an atrocious manner," says the Salesian.

"I saw the horror of the war in Yemen. We must pray for peace," he continues, thus re-launching the appeal of Pope Francis and Mgr. Paul Hinder, the Apostolic Vicar of Southern Arabia - which includes the United Arab Emirates, Oman and Yemen - who had in turn renewed the Pope's appeal on Monday 18 June.

Fr Muttathuparambil knows the Middle Eastern country well: there from 2010 to 2016, first in Hodeidah and then in Taiz, he was also there when, on 4 March 2016, in Aden, an Islamist group kidnapped his confrere Fr Tom Uzhunnalil from the elders home of the Missionaries of Charity, slaughtering four religious women and another 12 people. Given the dangerous conditions in the country, on 30 March 2016, the priest was forced to leave the mission to return to India, but expects to return to the service of the Yemeni people.

The Salesians of Bangalore will express their spiritual closeness to the people of Yemen specifically this next Saturday: "On June 23," explains Fr Muttathuparambil,  "we will offer a Mass and Eucharistic adoration in solidarity [with the population]. Together with my community, I will besiege Paradise [with prayers] for peace in Yemen. Let us pray to God to intervene and bring justice and peace."

In conclusion, the religious said, "The situation is extremely serious. People need food, water, medicine. Everything has been destroyed. We join Msgr. Hinder in prayer. He is very concerned about the region and about the Christians living in the four parishes," that is Sana'a, Taiz, Hodeidah and Aden.