Angola - A people rich in faith 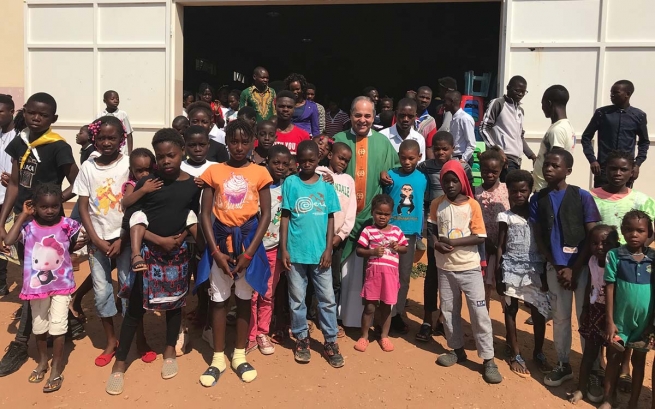 (ANS - Calulo) - For the the 125th anniversary celebration of the Catholic mission in Calulo, today entrusted to the Salesians, Fr João Carlos Ribeiro, SDB, had the opportunity to make a 10-day trip to Angola. Here are his impressions.

The Salesians have been present in Angola for over 30 years and have established a Vice Province with 12 Salesian houses; already a third of the Salesians are natives.

This is a country that is still undergoing reconstruction. Independence was achieved in 1975 and was followed by a bloody civil war from 1975 to 2002. Even today there are few industries and the roads are precarious. Despite being an oil-producing country, it has no refineries; it is rich in diamonds, but 70% of the population lives on less than $ 2 a day.

Angolans are a very religious people and over half of the population is Catholic. In the country there are 18 dioceses and many religious congregations, dedicated to missions among the poorest, with schools, kindergartens, vocational training centers and parishes, as in the case of the Salesians.

The parish of Calulo, animated by the Salesians, accompanies over 80 of these communities with a Catholic majority. In each of them there are about 20-30 families and a chapel, which also serves as a community school. In these communities the religious leader is usually a catechist, a married man who gathers the community for weekly prayer, guides religious festivals, takes responsibility for catechesis and participates in organizational and formation meetings.

Located in the mission center, or nearby, are the parish church, a school for teenagers, another for children of the Daughters of Mary Help of Christians (FMA), the FMA house and house of the Salesians and a farm. The mission also supports a symphony orchestra for children and adolescents.

The people are cheerful and very friendly and at Mass there is much participation. At every Mass the choir is led by a different group of the community, but all the people sing and participate. There are also numerous dances during the liturgy and all dress elegantly, while the children, accompanied by their catechists, remain silent.

Another thing to admire is catechesis. Many people participate in catechism classes. In Calulo there are more than 3,000 children and young people, not including adults.

In Angola we can help a lot and learn even more.