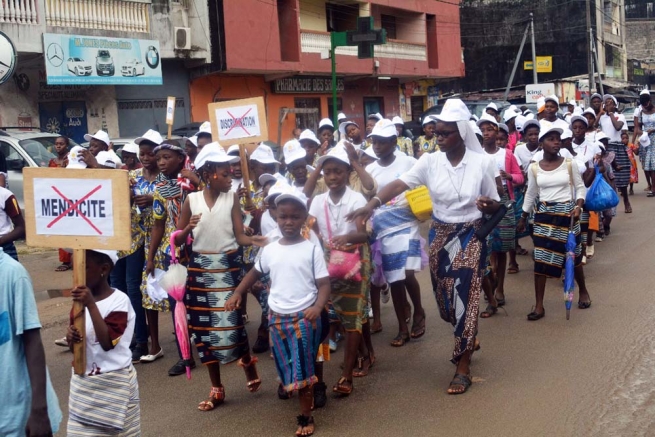 (ANS - Abidjan) – This year, the Salesian presence in Abidjan focuses on the protection of the environment and of children. The Salesians of Don Bosco have been active in the capital of the Ivory Coast for over 25 years, working tirelessly for the well-being of the city's youth. Their presence in this city is defined by the education and evangelization of the young, the heart of the Salesian charism.

Every year a series of activities are offered to achieve this goal and during the current pastoral year there have been two main activities: the campaign to combat the unhealthiness of the environment, and raising awareness against child abuse.

Regarding the environment, the Salesian community in Abidjan organized a special day on the theme with a march throughout the city's main streets. Carrying garbage bags, young people collected waste and garbage found on the streets and sensitized citizens on the importance of a healthy environment. The march, moreover, crossed the suburb of Koumassi, home of the Salesian center in the capital, an area which holds a large shantytown and where the population has to deal with the pollution produced by industrial plants, from permanent wastewater sewage, and piles of trash that remain on the streets.

Child abuse is sadly also part of the Ivorian situation: according to an investigation promoted in 2016 by the Government of the Ivory Coast in collaboration with UNICEF, "over 8 children in 10 aged between 1 and 14 years (86.5 %) have been victims of violent disciplinary action (psychological, emotional or physical)." To help respond to this scourge, the Salesian community of Abidjan - which counts among its centers a home for children at risk – organizes multiple actions towards the protection of children, children who say they escape from their family homes because of the mistreatment – at home.

In this case too, an awareness-raising campaign was launched, which resulted in a march of many children dressed in traditional clothes along the streets of Koumassi, flying the banner motto: "It is our responsibility to protect children from violence."

These two initiatives of the Salesians are aimed at educating consciences to work for a healthy life in a healthy environment (environmental protection) and for a better future for youth (the care and protection of children).

As Nelson Mandela said: "Education is the most powerful weapon we can use to change the world."