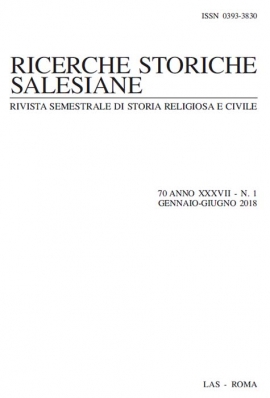 (ANS - Rome) - Don Bosco's commitment to the literacy of young people, the role of Salesians in spreading devotion to Mary Help of Christians in Poland, together with a critical edition of the unpublished speech of Giovanni Bosco seminarian on St. Bartholomew Apostle: this and much more featured in Issue Number 70 (January-June 2018) of "Ricerche Storiche Salesiane" (RSS), the bi-monthly magazine of religious and civil history, published by the Salesian Historical Institute (ISS).

In the STUDI sector, there are two essays:

Don Bosco for the literacy of young people in the mid-nineteenth century is the study of Vito Maurizio, who examines Don Bosco's contribution to the education of young illiterates of the working classes who generally did not have access to school, children he met at the oratory "Saint Francis de Sales" founded by him. It was probably not Turin's first, but he knew how to answer to the needs of his young people with determination.

The speech in honor of St Bartholomew the Apostle composed in Piedmontese by the seminarian Giovanni Bosco (1838), edited by Aldo Giraudo, professor of the Salesian Pontifical University. This is a critical edition and translation of the unpublished speech in Piedmontese dialect by Giovanni Bosco seminarian, recited at Castelnuovo in the church of the Confraternita, on the occasion of the feast of St. Bartholomew the Apostle in 1838. The document, recently discovered, reflects the sensitivity of the young Bosco, the tastes of his listeners and the practices of popular religiosity of that specific historical moment.

Completing the text, in the NOTA sector, is an essay on: Don Francesco Convertini. Profilo biografico, by Grazia Loparco, professor at the Auxilium Faculty; a number of Reviews and Reports, and the Bibliographic Repertoire: 2016-2017, edited by Cinzia Angelucci and Stanisław Zimniak.