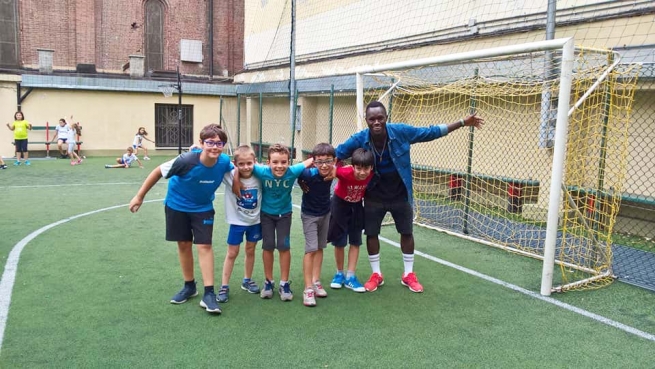 (ANS - Turin) - From the journey of hope on a refugee boat to animator in a summer oratory in Turin, where he is a reference point for children, teens and families, fully integrated with his peers: the beautiful - and successful - story of integration of Ousman S., 19, who arrived in Italy from Gambia aboard a refugee boat.

He arrived in Italy in March 2017. After several trials and troubles he found himself in Turin where, still a minor, he slept in the "Porta Nuova" train station. He did some work as an illegal street vendor under the porticoes until he met the Salesian educators who intercepted him and welcomed him into the oratory for a chat, a shower, something to eat, some clean clothes.

From that moment on, Ousman was no longer "invisible", because to accompany him there was, and still is, the Salesian community "San Salvario", as part of its national project "M'interesso di te", or I take care of – and care for - you.

"To foster integration, it is necessary not to keep the various activities separate," said Fr Mauro Mergola, director of the "San Luigi" oratory in Turin, which follows about 50 minors and foreign-born children just turned adults. "If the teens having difficulties are always in the usual group, they do not integrate. Here is the beauty of the courtyard as Don Bosco intended it, where everyone can meet in an educational place. We ask the kids to help with the different activities, to get involved. In this way they feel even more part of a community, their home."

Ousman's story is just one of many examples of successful integration, the result of the dedication of an educational community and of the aforesaid beneficiary.

On the World Day against Trafficking in Persons, promoted by the United Nations and celebrated today, 30 July, the Salesians once again demonstrate their commitment across the board to counteract this phenomenon, in every part of the world.

Among the initiatives the Salesians of Italy are involved in, two programs that are broad in their scope can be mentioned: "Stop Trafficking", which raises awareness among young people from countries of emigration to the risks of migratory journeys and offers them development alternatives in their towns or regions; and the project "M'interesso di Te", which gives support and the opportunity of a progressive integration to those "invisible" foreign minors and young people who have never entered the host communities or who have escaped too soon, and for this reason are in constant danger of falling into the networks of crime and exploitation.