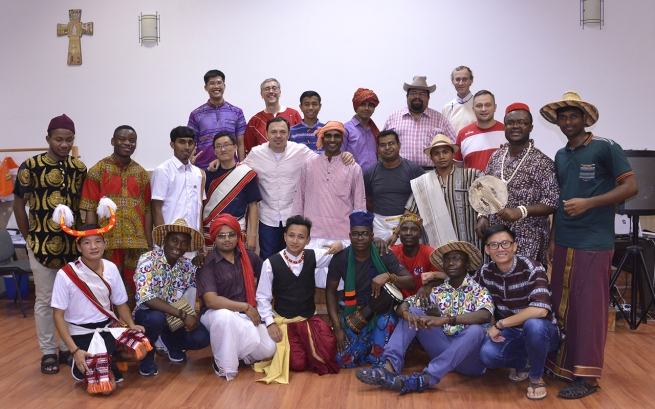 (ANS - Rome) - Ukraine, Argentina, Mexico, Laos, Tunisia, India ... And also Gambia, where the Salesian Congregation have set up a new missionary outpost: these are just some of the destinations that will be reached from the beginning of October by the spiritual Sons of Don Bosco. On Sunday, September 30, in fact, in the Basilica of Mary Help of Christians in Turin, there will be a repeat ancient gesture, now in its 149th edition, yet always current, because the world still needs missionaries: the envoy of the Salesian Missionary Expedition.

Twenty-five Salesians are taking part in the expedition and come from every corner of the world: 2 from America, 3 from Europe, 8 from Africa and 12 from Asia. Among these, there are 2 Salesian brothers, 6 priests and 17 young trainees. All together, in the last 3 weeks, they prepared themselves for the missionary life by attending the orientation course organized for them by the Mission Sector.

Eleven Daughters of Mary Help of Christians (FMA), who have also embraced the donation ad gentes, ad vitam, will also participate in the Eucharist with them.

During the Eucharist, which will be presided by the Rector Major, Fr Ángel Fernández Artime, all missionaries, Salesians and FMA, will receive the missionary crucifix: the first from the hands of the Successor of Don Bosco, the latter from Mother Yvonne Reungoat, Superior General of the FMA.

As usual, in the days preceding the dispatch, Turin-Valdocco will also celebrate another initiative with a missionary flavor, the Harambèe, "a festive meeting" - the meaning of the term in Swahili. Every year, the event rallies hundreds of young people who share Salesian love for the young who are marginalized in poor countries, an event shared together with those who have already experienced being missionary volunteers, perhaps in the summer months.

This year the theme of the Harambee revolves around the words addressed by the Angel to the pastors and to all of humanity: "I announce to you glad tidings of great joy" (Lk 2:10), and to the heartfelt invitation of Pope Francis contained in the Evangelii Gaudium "Let us not have ourselves be robbed of the joy of evangelization!"

The Eucharist of the 149th Salesian Missionary Expedition will start at 11:00 local time (UTC + 2). The event will be broadcast and commented live in Italian, English and Spanish on the Facebook page of ANS, with broadcasts starting at 10:00.