Japan – “May we become one body and one spirit in Christ.” Episcopal Ordination of Bishop Mario Yamanouchi, SDB 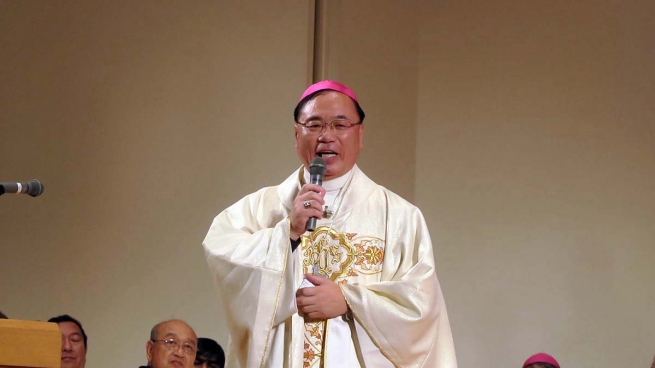 (ANS – Saitama) – The Episcopal Ordination of Bishop Mario Michiaki Yamanouchi SDB took place at Jubilee Hall of Urawa Akenohoshi Gakuen School, Saitama, Japan. Bishop Yamanouchi was installed and started to serve as the Bishop of Saitama Diocese, which consists of 4 prefectures in the north of Tokyo: Saitama, Gumma, Tochigi, and Ibaraki.

The Ordination Rite was presided by Archbishop Tarcisius Isao Kikuchi, SVD, Archbishop of Tokyo with some 130 Bishops, Priests and Deacons. A large number of congregation including his family, friends, and members of the Salesian Family was also present. The people who could not enter the hall watched the ceremony at the gymnasium monitor.

In the Ordination Rite, first, the Apostolic Letter of Pope Francis was read aloud in Latin by Archbishop Joseph Chennoth, the Apostolic Nuncio to Japan. Archbishop Peter Takeo Okada, who is the predecessor of the new Bishop, preached. "The installation of Bp. Yamanouchi as the Bishop of Saitama, who experienced moving to Argentina at the age of 8 with his family, is providential. This diocese is made of multinational and multicultural Catholic communities. We are living with a large variety of differences in our diocesan community, but Jesus calls us all to become more and more One in Him."

After the Laying on of Hands, receiving the Book of Gospels, the Ring, the Miter and the Pastoral Staff, Bp. Mario Yamanouchi was officially welcomed among the present Bishops and was installed as the diocesan bishop of Saitama. The embraces of the new Bishop and the others with smiles were very impressive.

After the ceremony the newly ordained bishop presided the Liturgy of the Eucharist. In the communion, the new Bishop gave the Eucharist firstly to his mother - Cecilia Yamanouchi. A wonderful liturgy was animated by songs in a variety of languages such as English, Spanish, Portuguese, and Vietnamese choirs. These are the main language Catholic groups in the Saitama diocese with 20,000 Japanese Catholics and close to 100,000 non-Japanese (majority migrant) Catholics.

At the end of the 3hrs whole ceremony, Bishop Mario greeted the congregation in Japanese and Spanish, receiving a big applause. "Today's ceremony is a big Pentecost for the Catholic Church in Japan, Saitama Diocese, and the Salesian Family. I'd like to say thank you, every one of you."

As his motto, the new bishop has chosen the words "UNUM CORPUS IN CHRISTO" - MAY WE BECOME ONE BODY AND ONE SPIRIT IN CHRIST, from the 3rd Eucharistic Prayer". Following this motto, the memorial song composed by Fr. Izumi Shiota (Saitama Diocese) was sung as the concluding song.

After the completion of the ceremony, the celebration was held, and a lot of people received the new Bishop's Blessing.