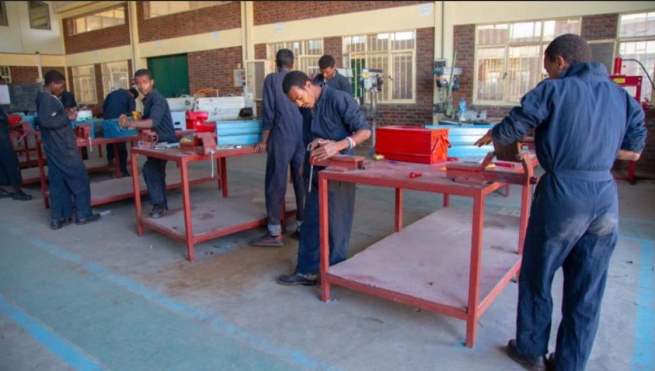 (ANS - Turin) - "We are aware that our project is a drop in the ocean, but if it were not there, as Mother Teresa of Calcutta said, the ocean would have one drop less." Thus the Salesian brother Giampietro Pettenon, President of the "Missioni Don Bosco" association of Turin, illustrates the meaning of the "Stop Tratta" project, that is: stop human trafficking.

"The project began in the autumn of 2015. In June of that year Pope Francis came to Turin and spoke of the vocation to concrete measures of the sons and daughters of Don Bosco. He also expressed his concerns about the fate of thousands of young people trying to reach Europe, risking their lives. We felt challenged and understood that we had to act to offer the young African generations an alternative to emigration."

The project, which lasts five years and also involves the Salesian NGO "VIS", is active in 14 works in six countries - Ethiopia, Ghana, Senegal Mali, Nigeria, Liberia - and includes three phases. The first phase, essentially ended, is informative and about raising awareness: thousands of young people and parents have been made aware of the many risks of traveling to Europe and difficulties once they reach their destination.

"Despite much media present in Africa, people often ignore the dangers of these trips," says Mr. Pettenon. "The youths who come to Europe do not talk about it because of shame. We tell the parents the work of certain unscrupulous agencies and their proposals-scams: when they find out they start to dissuade their children from leaving."

The second phase of the project is currently underway, the formative phase: it foresees providing short-term vocational courses (from one to nine months) in the most requested disciplines in the area: agriculture, livestock, hydraulics, mechanics, tailoring, information technology. "Held by teachers and educators, the courses are about a thousand and we estimate that they can involve a total of 18 thousand young people and mothers," the Salesian continues.

Once formation is over - and this is the third phase of the project - young people and women can contact local banks to obtain the necessary funding to acquire the necessary tools to start a small business.

"Until today, thanks to the generosity of our benefactors, many young people and women have started small businesses: there are young people who are dedicated to the collection and trade of prickly pears, others who have built greenhouses for vegetables, there are mothers who cook sweets they then sell in the markets and men who work as plumbers and electricians in big cities ... "