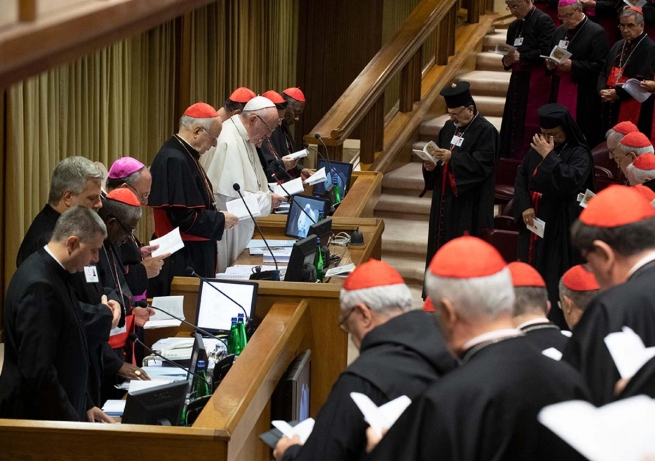 (ANS - Vatican City) - For Fr Rossano Sala, SDB, Special Secretary of the Synod, the Church is indebted regarding the listening to young people because she speaks little with God. For this reason he hailed with great favor the initiative of the Holy Father to foresee frequent minutes of silence, for discernment, during the synodal works.

"From the inaugural words of Pope Francis it emerged that the word 'listening' is truly central in this Synod ... We realized that the Church struggles to listen, speaks a little too much and listens too little. This means that a spiritual conversion is really necessary. I would also say that the deepest root of this lack of listening to young people is probably a lack of listening to God. We talk a lot about God, but maybe we talk little with God. And this is a lack of credibility. When we speak of God, without having first spoken with God, we are not very credible."

"A risk underlined by the Pope," adds Fr Sala, "is to talk about young people starting from outdated categories and mental schemes, according to the clichés of the youth of '68, who want to criticize ... Instead the experience had during the pre-Synod meeting is that of a group who, quietly, wanted with great respect and sensitivity to put many points at the center of the ecclesial agenda, all of which were incorporated into the Instrumentum laboris."

"Certainly," he explains, "the current generation is rather fragile: it is searching, it wants an alliance with adults, it is looking for reconciliation, because it is fragmented and bombarded by a thousand solicitations. This is the great theme of accompaniment that has emerged at the pre-synod: young people ask for accompaniment."

Finally, Fr Sala explains the value of the discernment that the Pope has asked the Synod Fathers to practice: "Pope Francis introduced a procedural change, establishing that, during the Assembly's work, every five interventions there are three minutes of silence. I consider it a courageous and prophetic choice: it is the clarification that the working method of discernment is a spiritual methodology. It is not simply a technique, but a spiritual event."

"Silence is absolutely necessary to make the words heard resound in the heart,"  concludes Fr Sala. "One of the most interesting things that young people have expressed in the two years of the pre-Synodal phase is the great 'thirst' of silence, of contemplation."