Vatican - A "mate", a book and a request: Cardinal Daniel Sturla, SDB, with Pope at Vatican 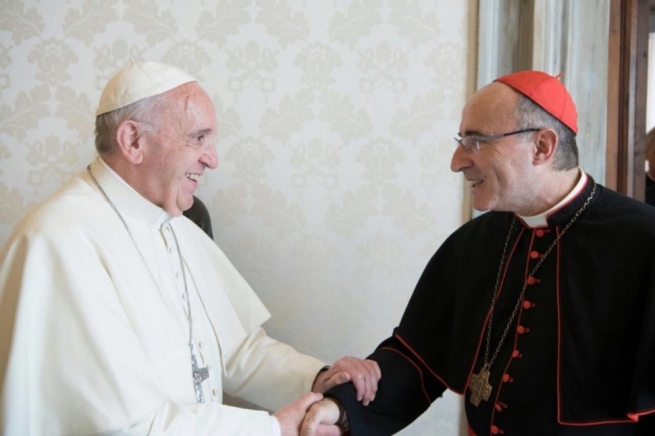 (ANS - Vatican City) - The telephone in the room rings. "The Pope can receive you in five minutes", they say to Cardinal Daniel Sturla, Salesian, Archbishop of Montevideo, Uruguay. Just enough time to grab two letters, a book and a parcel of "alfajores" (typical Latin American sweets) and reach him. The Cardinal had requested a 15-minute hearing, but the meeting lasted for over half an hour.

"We've known each other for years, so I was confident that he would grant me a meeting," said card. Sturla to the Uruguayan newspaper El Observador, directly from the residence of Santa Marta - in which Pope Francis lives - inside the Vatican, where he is participating in the Synod of Bishops on young people. The Pope usually receives guests in the Apostolic Palace, but with card. Sturla he made an exception and they met in his personal office. "It was an informal appointment," explained the cardinal.

"I wanted to ask him to help us with the beatification of Jacinto Vera." The first Catholic bishop of Montevideo was declared Servant of God and then venerable in 2015. Now the Episcopal Conference of Uruguay wants the founder of the national clergy to be declared blessed and then holy. "For this to happen, it is necessary to show that someone has prayed asking for his intercession and that he has received a miracle."

The Pope promised to follow the question closely and asked card. Sturla to thank the Uruguayan laity for the letter they sent him, which expresses solidarity and support in the "difficult moments" that the Church is going through after the accusations of sexual abuse.

During their meeting, card. Sturla also gave the Pope the book "La Iglesia Católica desde la matriz" (The Catholic Church starting from the matrix) that narrates the 400 years of the presence of the Church in Uruguay.

But the gift that really made the Pope smile was the pack of 12 alfajores filled with dulce de leche. Although the Supreme Pontiff likes alfajores, what he is really passionate about is the mate drink (made with an infusion of yerba mate leaves). And on this, the Salesian cardinal told another story: "Two days ago, during a pause in the Synod's work, I was with some Argentine bishops and we were taking a bit of mate". Pope Francis then approached and asked for some. "'But this is Uruguayan yerba!", exclaimed the Pope, who had noticed it because, unlike the Argentine one, it was finely grounded. So Cardinal Sturla good-naturedly joked with him: "Francesco ... If an Argentine wants to enjoy a good mate, he must take it with Uruguayan yerba!"

Nor did the Salesian Cardinal leave the meeting empty-handed: the Pope, in addition to committing himself to following the beatification of Jacinto Vera, gave him blessed rosaries and a book with his Buenos Aires' homilies.