Vatican - Young saints to renew the Church and the world 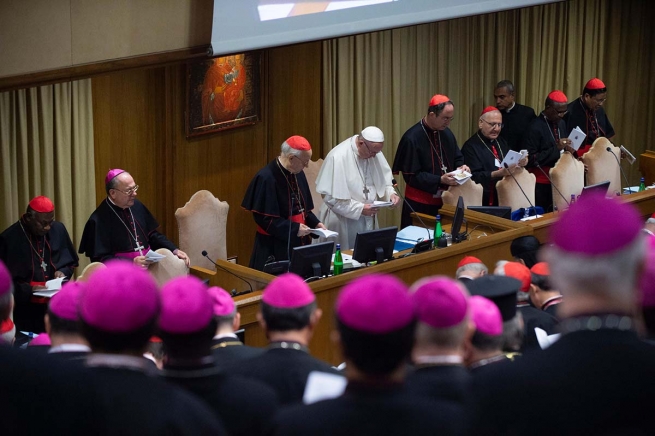 (ANS - Vatican City) - Twenty-six days of work, over 300 people involved among Synodal Fathers, experts and auditors, as many as 14 minor linguistic circles for group work ... After all this huge effort and commitment, what remains at the end of the Synod of Bishops on "Youth, faith and vocational discernment"? Certainly, the Synod produced a final document rich in indications. But Pope Francis said something more: "The result is not the Document ... We have made this document, we have approved it. Now the Spirit will make it work in the heart."

In his speech at the synodal assembly, after the approval - voted paragraph by paragraph - of the Final Document, the Holy Father clarified the importance of the synod itself: "it is not a parliament", but "a protected space so the Holy Spirit may act."

The true richness produced by the Synod therefore lies primarily in the greater knowledge that the whole Church now has of the world of youth and its desires, thanks to a journey made elbow to elbow between the Synodal Fathers and the young; it resides in the awareness that the Church and the world urgently need young people, their enthusiasm and their energies; it resides in accepting even only a part of the thousand ideas offered to renew Youth Ministry in the dioceses, in the parishes and among the movements.

After weeks of listening to the voice of Christ through the young, the Synod Fathers also finally wanted to address the youth, through a letter in which they simply stated: "we want to be collaborators of your joy so that your expectations may turn into ideals."

The bishops and the Church all recognize the weaknesses and sins, but hope that these are not obstacles to the trust of the young; because the Church, as a Mother, is ready to accompany them "in every part of the earth."

Certainly, even the elaboration of the Final Document was not a mere formal act: divided into three parts, each subdivided into four chapters, it incorporated the structure of the Instrumentum Laboris, thus reflecting the three phases of "acknowledging", "interpreting", "choosing" as stages of the path to be put into practice in the life of the Church in relation to the young. Also significant was the choice to affix the icon of Emmaus as a prelude, that is, the image of Jesus who becomes a companion on the streets of men and knows how to listen to them before correcting them.

In its 166 paragraphs, the Final Document takes a position on a large number of topics related to the world of youth: the role of parishes, reception of migrants, conditions of vulnerability, sexuality, liturgy, marriage training, digital spaces, different types of abuse, the missionary spirit ...

What emerges is that the synodal path is not considered finished or complete, but rather must translate into the most important phase: the phase of implementation. And the horizon is that of sainthood. In fact, the last paragraph reads: "The balm of sainthood generated by the good life of many young people can cure the wounds of the Church and the world ... Young saints encourage us to return to our first love."