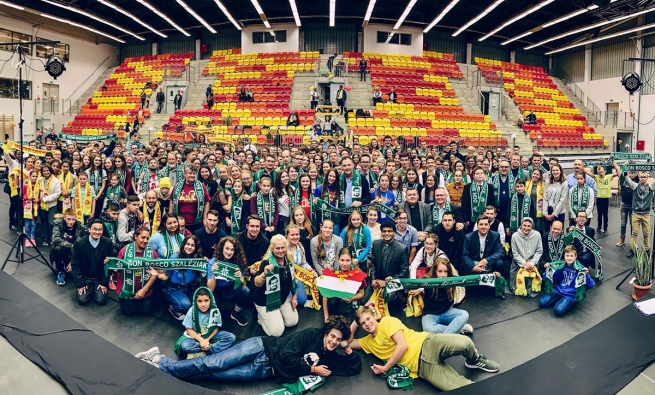 (ANS - Budapest) – Lasting only a few days, but filled with all the elements that distinguish a "family" and "Salesian" visit: joy, authentic authentic sharing, the presence of young people and educators, spirituality. Thus were the features of the Animation Visit of the Rector Major, Fr Ángel Fernández Artime, to the "Santo Stefano Re" Province of Hungary.

In the morning of Thursday 2, he reached Kazincbarcika, where he met the Provincial Council. in the afternoon he celebrated the Eucharist and gathered with the young who attend the country's Salesian houses.

The meeting with young people was characterized by an atmosphere of great joy. It opened with the young people of the Hungarian Salesian Youth Movement representing the history of Hungary and of the Salesian presence in the Nation. Then the Rector Major made himself available to answer all their questions.

He reminded them that a university degree or a job cannot be the purpose of life, but only tools through which they can best live life. However, to succeed in this aim, he underlined that we must give ourselves to others, and recalled that some statistics presented at the Synod on young people showed that it is precisely the children of European countries, where there is greater wellbeing, who are less satisfied with life.  "It is important to set goals, to have dreams in which to believe, and even more to create opportunities for service to others: because when you do something for someone else for free, you experience happiness that you cannot find elsewhere," said the Rector Major.

Saturday 3, again in Budapest, the Rector Major met with all the Salesians of the Province and took part in the conference organized for the teachers of the schools of Salesians and of the Daughters of Mary Help of Christians present in the country. Then, in the afternoon, he met the Daughters of Mary Help of Christians and the Salesian Cooperators active in the city.

On Sunday 4 November the Rector Major returned to the Salesian headquarters in Rome.