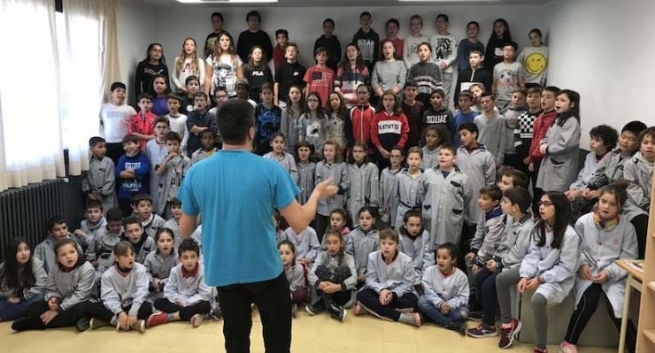 (ANS - Girona) - The Salesian house in Ripoll, in Girona, has given a great boost to the traditional Christmas show, which this year will be more supportive than ever. These days, the Salesian school students are finishing the last details of a project that aims to raise funds. The goal is to end a very important shortage that has been detected in the city, in relation to children with small disabilities or infirmities.

The definition of rare disease is given by its incidence, that is to say that it appears in less than 5 cases per 10,000 inhabitants. According to the World Health Organization (WHO), over 7,000 different diseases and syndromes affect between 6 and 8% of the world's population. In Spain there are more than three million people suffering from rare diseases and at least half of these diseases imply a lifelong commitment. Furthermore, two thirds of these illnesses are highly debilitating and appear within two years of life, with an important tendency towards chronicity, as explained by Juan Ignacio Marín.

To fulfill this project, "we asked the students to look for a park suitable for these people and they did not find one," explained the music teacher Roger Vaqué. Therefore, the final goal that was proposed was to change the current situation, with the installation of some elements such as "a swing for children in wheelchairs."

The show that will be staged is inspired by the book "Wonder" and its film version, which for years has been proposed in the Salesian center. It tells the story of growth and overcoming his limits of Auggie Pullman, a boy born with a serious malformation.

Furthermore, other actions were also promoted to reach the final goal. "We will send letters to the companies of Ripoll and the surrounding area asking for their collaboration and the micro-patronage campaign has been confirmed through the Verkami site." added Prof. Vaqué.

On the stage of the Comtal Theater one shall see the result of months of work. Over 200 people are expected to participate. One half will sing and the other half will recite. Three unpublished songs will be presented with a musical accompaniment that has been adapted for the occasion.

The Salesians of Ripoll foresee two performances - one next Friday and one the following Sunday - both aimed at raising funds that will be entirely destined to re-adapt a city park.