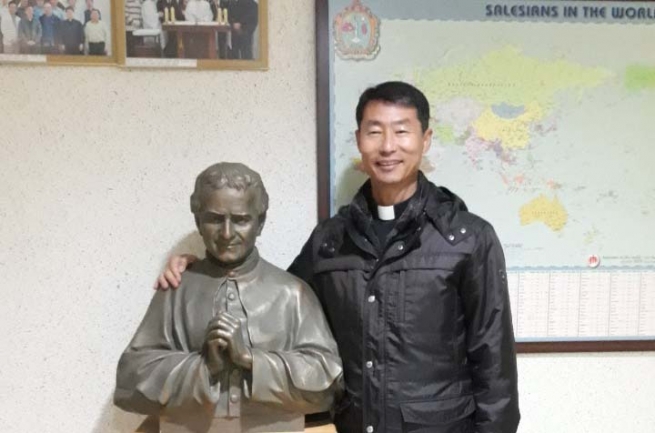 (ANS - Rome) – After the consultation in Korea and the discernment process at Sacro Cuore for the new Provincial, the Rector Major with the consent of his Council appointed Fr Timothy Choi Wonchol (51 years of age) as the 5th Provincial of Korea, for the six year period 2019-2025.

Fr Timothy Choi was born in South Korea on February 16, 1967, and after a few years as physical education teacher, joined the Salesian Novitiate in 1999-2000 (Daejon), made his first profession on January 30, 2000, and perpetual profession on May 1, 2006, in Parañaque - Manila. After his ordination in 2007 he spent four years as a missionary in Papua New Guinea in three houses – Lariau (Kerema), Rapolo (Vunabosco) and East Boroko (Port Moresby). After his PNG mission he returned to his native Korea to serve as Provincial Secretary in Seoul (2012-2014) and since January 2015 as Novice Director and Rector of the Neri community. At the province level he was involved as Provincial Councillor (2015-2018), a member of the Formation Commission and Provincial Delegate for Mission animation.

The new Provincial speaks Korean and English. His intercultural experience in the Philippines and missionary life in PNG will help him accompany the 118 confreres who are involved in the varied mission for youth in need in Korea. From the day of his ordination Fr Timothy has chosen the Gospel verse John 4, 34 “My food is to do the will of the One who sent me, and to complete His work” as his life motto.

After the Rector Major's phone call the newly appointed Provincial shares his thoughts: "For the moment I don’t know why the Lord chose me as the new Provincial; however, I will do my best to find out the will of the One who chose me and to complete His work in my Province with the help of my beloved confreres under the guidance of Mary, Help of Christians."

The EAO Region congratulates the Province of the Holy Korean Martyrs (KOR) confreres on their 5th Provincial, promises our prayers and entrusts his ministry for the coming six-year period to the protection and guidance of Mary Help of Christians.

The Profession of Faith of the new Provincial will take place on Sunday, 3 March, 2019, during the 11 AM Eucharistic celebration in the Salesian Provincial House, Seoul – South Korea. On the following day the EAO provincials will meet in the same venue (March 4-8).

Fr Timothy is already the fourth EAO Provincial appointed during this year 2018, after China, Japan and Indonesia. As for every new provincial he is called to meet the Rector Major soon, next January in Rome, and then attend the new provincials course at Sacro Cuore in June 2019.