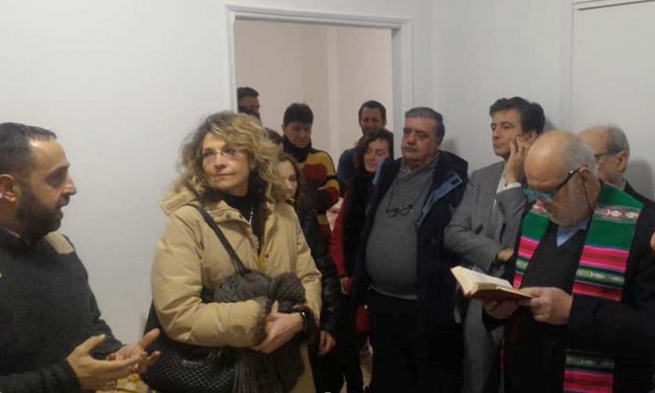 (ANS – Collegno) –  The E.T. Social Cooperative, (Educators in the Territory, or Neighbourhood Educators), which is affiliated with the Salesiani per il Sociale (a Salesian Welfare organisation) opened its CASA di Giò, or Youth Home  on 9 January 2019. The opening took place in a quiet and familiar atmosphere, involving a time for prayer and an opening blessing.

“CASA di GIÒ” is the first residential structure that falls under the “Group Apartment” classification and aims at offering temporary accommodation for young males between the age of 16 and 21. The project, conceived as a response to the growing needs of Turin city and its metropolitan district, wishes to help its young residents by fostering their growth at many levels: by looking after them individually, giving attention to the group, the district and the city, healing family connections. It will do all this by offering shared living family-style, supported by educators.

With regard to the choice of name, those responsible explain: “Giò meaning ‘giovani’ or youth, whom we choose by preference; Giò also meaning Giovanni (John) Bosco, in memory of our founding father; Giò is also the name of one of the characters in the book ‘Piccole donne’ (Young Women), because Giò is the one who looks after the poorest kids, the ‘least’.”

Thinking of those who will reside at “Casa di Giò” the Cooperative made Pope Francis’ words their own: “Let us never forget that true power is service. We need to look after people, each individual, lovingly, especially children, the elderly, those who are the weakest and who are often at the peripheries of our heart.”

Hence the choice to turn to young people traumatised by sorrowful experiences, people affected by life, looking for support, accompaniment, someone to be close to them, solidarity so they can build or rebuild their own life project and thus achieve real personal autonomy which extends to where they live and work, and a positive settling into society.

This educational approach to work is aimed at establishing a relationship of trust between the young worker and the educator. It is up to the educator to recognise and have others recognise each person’s resources, abilities, knowledge and then plan the path with him to the realisation of such.

Residents at “Casa di Giò” will find a family dimension in this educational rapport which becomes a trusted point of reference for the individual, the setting winch welcomes him and for managing daily life.